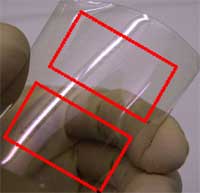 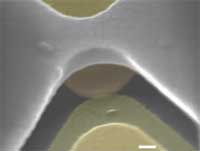 Organic materials offer new electronic functionality not available in inorganic devices. Promising examples of novel characteristics in organic devices range from the memory effects observed in monolayers and polymer films to negative differential resistance devices. However, the integration of organic compounds within nanoscale electronic circuitry poses considerable challenges for materials physics and chemistry, and a detailed understanding of the conduction mechanisms, switching and memory is still lacking. With increasing research into very different material systems such as oxides, solid-state electrolytes, phase-change memory materials, it is becoming clear that electronic switching on the smallest length scale cannot be purely electronic phenomena. Rather, a motion of heavier constituents has to be involved that will in turn change the electronic properties. New work conducted at Bell Labs demonstrates the success of such a line of thought in molecular systems. The Bell scientists demonstrated a novel approach to creating and chemically modifying conducting electronic states in nanoscale molecular devices.

In the future, wearable electronics will go far beyond just very small electronic devices. Not only will such devices be embedded on textile substrates, but an electronics device or system could become the fabric itself. Electronics textiles will allow the design and production of a new generation of garments with distributed sensors and electronic functions. Such e-textiles will have the revolutionary ability to sense, act, store, emit, and move (think biomedical monitoring functions or new man-machine interfaces) while leveraging an existing low-cost textile manufacturing infrastructure. Reporting a novel approach through the construction of all-organic wire electrochemical transistor devices (WECT) , researchers in Sweden show that textile monofilaments can be coated with continuous thin films of a conducting polymer and used to create microscale WECTs on single fibers. They also demonstrate inverters and multiplexers for digital logic. This opens an avenue for three-dimensional polymer micro-electronics, where large-scale circuits can be designed and integrated directly into the three-dimensional structure of woven fibers.

A few years ago it was discovered that the process of thermal inkjet printing can be applied to fabricate hard tissue scaffolds (such as bones) and, just recently, soft tissue with liquid biomaterials. Research is also underway to use inkjet printing for the fabrication of organic semiconductors, which, because of their low stability, will be targeted at one-time-only applications such as water purity testers. Compared to the research done with respect to organic materials, inkjet printing of inorganic materials for the formation of active devices is relatively rare. To date, only a handful of inorganic materials have been inkjet printed, primarily because of the difficulty in preparing inkjet-printable precursors. Current methods for the production of functional inorganic electronic devices are quite expensive because they require the sequential deposition, patterning, and etching of selected semiconducting, conducting, and insulating materials, involving multiple photolithography and vacuum-deposition processes. Now though, researchers have come up with a process for printable inorganic semiconductors, opening a route to the fabrication of high-performance and ultra low-cost electronics such as transparent electronics and thin film solar cells.