Just looking at graphene can change its properties 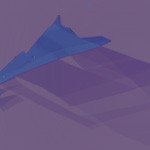 Graphene is a recently discovered allotrope of carbon, which consists of a planar single sheet of carbon atoms arranged in honeycomb lattice. It has attracted tremendous attention of the nanotechnology research community owing to a number of unique physical properties. From a practical point of view, some of the most interesting characteristics of graphene are its extraordinarily high room temperature carrier mobility and recently measured extremely high thermal conductivity. The outstanding current and heat conduction properties of graphene are beneficial for the proposed electronic, interconnect, and thermal management applications. There is a realistic possibility that soon the fastest transistors and most sensitive detectors will be made out of graphene. For instance, we have just reported that next generation computer memory could be made of graphene. In order to build useful devices from materials which have only atomic thickness, one has to use extensively scanning electron microscopy, transmission electron microscopy, and focused ion beam processing. Unfortunately, all material characterization techniques which involve electron beam irradiation of the samples may result in damage to the material and disordering of the crystalline lattice. So far, despite the practical importance of the issue, the scale of this potential damage to single-layer of bi-layer graphene has not been investigated. What happens with the crystalline lattice has also been unclear.