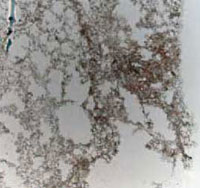 Inhalation, or respiratory, therapy is a fairly old discipline of medicine that dates back to ancient times (and not always for purely therapeutic effects; witness the hookah). In the late 18th century, earthenware inhalers became popular for the inhalation of air drawn through infusions of plants and other ingredients and about 50 years ago the first pressurized metered dose inhaler was put on the market. Especially people suffering from asthma are very familiar with inhalers - devices that help deliver a specific amount of medication to the lungs. The delivery of drugs via the pulmonary route is a potentially effective form of therapy not only for asthma but also for for patients with other chronic diseases, including the debilitating hereditary disease, cystic fibrosis, type I diabetes (insulin is absorbed well through the lungs), and recently lung cancer. During inhalation therapy the drugs are delivered in aerosol form, meaning that very small particles of the drug are suspended in air (liquid particles make mist, solid particles make fume or dust). Unfortunately, state the-of-the-art aerosol delivery technologies do not allow to target aerosols to specific regions of the lung. Researchers in Germany now have show that aerosols containing magnetic nanoparticles can be guided inside the lungs and thus offer a potential new route for lung cancer treatment. 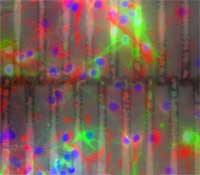 Nanobionics - where the boundaries between electronics and biology become fuzzy 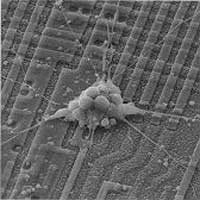 In case you are not old enough to remember the TV series The Six Million Dollar Man during the 1970s, the show was about an astronaut, Steve Austin, who got severely injured during a crash and became a guinea pig for bionics experiments by the CIA. In an operation that cost six million dollars, his right arm, both legs and the left eye are replaced by bionic (cybernetic) implants that vastly enhanced his strength, speed and vision. Never mind Hollywood, though, but bionics - a word formed from biology and electronics - has become a serious research field. In particular the development of artificial muscles is progressing rapidly. Nature's solution to producing fast contracting muscles is to use nanotechnology. The challenge for scientists is to mimic the intricacy of natural muscle in their artificial-muscle systems. As material scientists and engineers delve into the nanodomain, the boundaries between electronics and biology become fuzzy and this is exactly what they want: a seamless transition between the hard world of electronics and the soft world of biology. 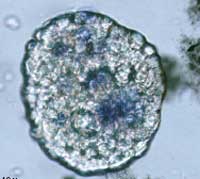 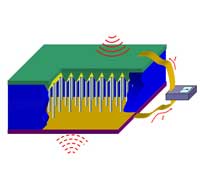 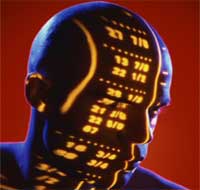 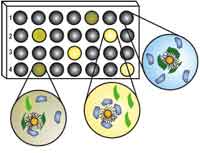 Biomarkers are of increasing importance in modern medicine for the purpose of early detection and diagnosis of a disease, for instance cancer. Biomarkers are mostly protein molecules that can be measured in blood, other body fluids, and tissues to assess the presence or state of a disease. For example, the presence of an antibody may indicate an infection or an antigen, such as PSA, might indicate the presence of prostate-specific cancer cells. Although protein-based approaches to early detection and diagnosis of cancer have a clear advantage over other, more invasive, methods, protein detection is a challenging problem owing to the structural diversity and complexity of the target analytes. State-of-the-art detection methods have limited application due to their high production cost and instability. Another limitation of current proteomic diagnostics is the limitation of arrays to one or a few markers only; in other words, you can only test for the specific markers that you are looking for and not generally measure levels of proteins in your blood in order to detect anomalies. A novel nanotechnology based protein detector array could change that.

A new type of nanoparticle to kill cancer cells 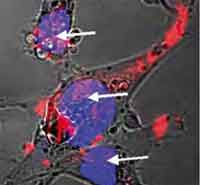 In chemotherapy doctors are using a carpet bombing approach to destroy cancer cells: the patient is pumped full of cytotoxic drugs, that go everywhere in the body, with the hope that enough of the drugs reach the cancer cells and target their nuclear DNA to damage it or destroy the cell. Not only do chemotherapeutic techniques have a range of often serious side effects, mainly affecting all the fast-dividing cells of the body, it also has been shown that often less than 1% of the administered drug molecules enter tumor cells and bind to the nuclear DNA. Another complication is drug resistance of cancer cells. This actually is one of the main causes of failure in the treatment of cancer. Dividing cancer cells acquire genetic changes at a high rate, which means that the cells in a tumor that are resistant to a particular drug will survive and multiply. The result is the re-growth of a tumor that is not sensitive to the original drug. Cancer researchers are looking to nanoparticles as a drug carrier capable of localizing and directly releasing drugs into the cell nucleus, thereby circumventing the multidrug-resistance and intracellular drug-resistance mechanisms to effectively deliver drugs to the vicinity of DNA, leading to a high therapeutic efficacy. Scientists now have developed nanoparticles capable of localizing into the nucleus, giving hope to a much more effective cancer chemotherapy that allows to pinpoint individual cells.