MEMS is an acronym that stands for microelectromechanical systems. It describes a manufacturing technology used to create microscale integrated devices or systems that combine mechanical and electrical components. These devices and systems have the ability to sense, control and actuate on the micro scale, and generate effects on the macro scale. Take for example an airbag, where the (microscale) accelerometer in the airbag’s control unit can trigger the rapid inflation of the (macroscale) airbag when it senses a sudden change in velocity.

What is MEMS technology?

MEMS are mechanical sensors and actuators that are fabricated using micromachining batch technologies similar to those used for integrated circuits. This translates into highly scalable production processes and low per-device production costs.
MEMS have feature sizes ranging from micrometers to millimeters. To see how small that is, consider that a regular sheet of paper is between 70 and 180 micrometers thick. 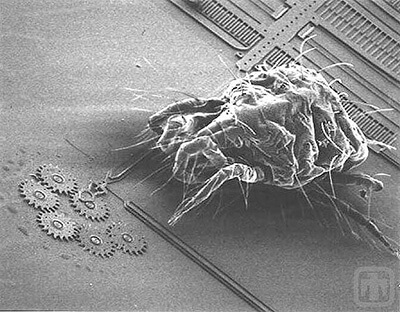 A mite, less than 1 mm in size, approaching a microscale gear chain. (Image: Sandia National Laboratories)
The one main criterion of MEMS is that there are at least some elements having some sort of mechanical functionality whether or not these elements can move. MEMS devices can vary from simple structures with no moving elements, to extremely complex electromechanical microsystems with several moving elements under the control of integrated microelectronics.

MEMS consist of any combination of mechanical (levers, springs, membranes, combs, channels) and electrical (resistors, capacitors, inductors, etc.) components to work as sensors or actuators.
In their most general form, MEMS consist of four elements: mechanical microstructures, microsensors, micro-actuators and micro-electronics, all integrated onto the same chip.
MEMS can act as sensors, receiving information from their environment and providing an electrical output signal, or as actuators, devices that convert an electrical signal into an action as required by a decision from the control system. Both sensors and actuators are transducers, devices that transforms one form of signal or energy into another form.
A MEMS device typically contains a microelectromechanical sensor or actuator element packaged together with an integrated circuit (IC). The IC provides an electrical interface to the sensor or actuator, signal processing / compensation, and an analog or digital output.
Whereas the IC exploits the electrical properties of silicon, MEMS takes advantage of other material properties like optical, mechanical, thermal, magnetic, chemical, etc. 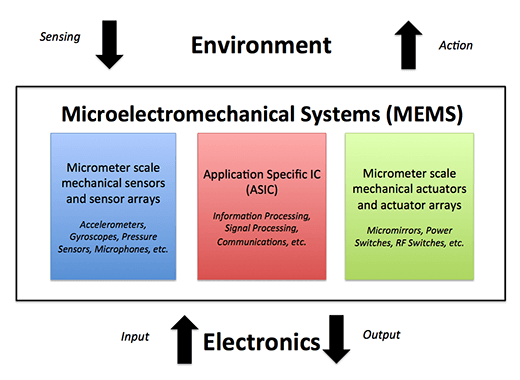 Functionality of a MEMS device. (Image: ITRS)
For example, MEMS are used as accelerometers in modern automobile airbags where they sense rapid deceleration and, if the force is beyond a programmed threshold, initiate the inflation of the airbag.
The size of today's smartphones would be impossible without the use of numerous MEMS devices. A simple function like rotating the screen of your phone or tablet requires a MEMS. Apart from accelerometers and gyroscopes, smartphones contain micro-mirrors, image sensors, auto-focus actuators, pressure sensors, magnetometers, microphones, proximity sensors and many more.

The fabrication of microelectromechanical systems uses some of the same processes and tools used to fabricate integrated circuits (e.g., deposition, photolithography, etch). However, MEMS technology has altered or enhanced some of these techniques, as well as added new processes, in order to build mechanical devices such as microfluidic channels, gears, cantilevers, micro motors, comb drives and gyroscopes.
These adopted techniques for MEMS fabrication are also called micromachining:
Bulk micromachining etches into a substrate to form 3D mechanical elements such as channels, chambers and valves.
Surface micromachining constructs microscale mechanical components and systems on the surface of a substrate by alternately depositing, patterning and etching thin films.
High-aspect-ratio micromachining (HARM), which includes technology such as LIGA (a German acronym from Lithographie, Galvanoformung, Abformung translated as lithography, electroforming and molding), combines collimated x-ray lithography with electroplating and molding techniques to create high aspect ratio (tall and thin) structures or deep cavities needed for certain types of MEMS devices.

Scanning electron microscope (SEM) images of products from each type of micromachining process (Source: BioPOETS Lab, Berkeley). Left: Microchambers and channels fabricated using bulk micromachining. Middle: Layers of gears made possible through surface micromachining. Right: A waveguide produced using LIGA. (Source: Sandia National Laboratories)
Most laser micromachining processes are not parallel and hence not fast enough for effective MEMS fabrication. Nonetheless, they have utility in specialty micromachining or making molds.
Unlike the batch manufacturing technologies used for integrated circuits, the MEMS industry does not share a generic technology platform like the semiconductor industry.
On the contrary. There are dozens of MEMS product groups, each containing several different products for specific applications and markets, and each of these product groups relies on its own, often unique, technology.
If you want to delve deeper into MEMS fabrication, the Support Center for Microsystems Education has some excellent and comprehensive educational materials here on their website.

A major application for MEMS is as sensors. Primary MEMS sensors are pressure sensors, chemical sensors, and inertial sensors (accelerometers and gyroscopes), and infrared sensors for temperature measurements.
MEMS sensors can be used in combinations with other sensors for multi-sensing applications. For example, a MEMS for laboratory testing (lab-on-a-chip) can be designed with sensors to measure the flow rate of a liquid sample and at the same time identify any contaminates within the sample.
This video shows real images of a microscopic gear and actuator in a MEMS (microelectromechanical system) device. A tiny actuator moves back and forth in a ratcheting motion that drives the rotation of a microscopic ring gear. To track the actuator's motion, researchers attached fluorescent particles to the actuator. Using the light-emitting particles, researchers were able to track displacements as small as billionths of a meter, and rotations as tiny as several millionths of a radian at a rate of 1000 times per second. (Video credit: Jennifer Lauren Lee/NIST. Music credit: Kevin MacLeod).
In addition to sensors, MEMS consist of pumping devices, gear trains, movable mirrors, miniature robots, tweezers, tools and lasers. These devices have found numerous applications with various fields such as biomedical, optical, wireless networks, aerospace, and consumer products.
Biomedical applications of MEMS
Pressure sensors used for instance to monitor blood pressure in IV lines of patients in intensive care; respiratory monitoring in ventilators; inhalers; kidney dialysis; drug infusion pumps; MEMS electrodes used in neuro-signal detection and neuro-stimulation applications.
Lab-on-chip devices and microfluidics include dispensing of small amounts of liquids as small as a picoliter and flow rates of as low as a few microliters per minute found in needle-less injectors, nebulizers, insulin pumps, and drug delivery systems.
MEMS tweezers or miniature robot arms that move, rotate, cut and place cells. 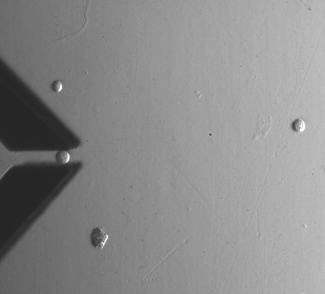 The Internet-of-Things (IoT) and the adoption of smart connected devices at a huge scale currently is the major driver for MEMS products.
IoT devices have the capability to connect with the internet and they feature technical features like MEMS sensors and actuators, software, and power supply. Look at watches: Traditional manual watches were used to display the time. Period. Modern IoT smartwatches allow you to measure heartbeat rate, blood pressure, calorie count, steps walked etc. and transmit this data the cloud.
IoT devices have an almost limitless application range from smart toys to industrial plant monitoring. Just some examples:

Nanotechnology research is dependent on MEMS devices. For instance, scanning tunneling-tip microscopy (STM) and atomic force microscopy (AFM) are devices that wouldn’t exist without MEMS components. In fact, a variety of MEMS technologies are required in order to interface with the nanoscale domain.
The logical continuation of further miniaturization will lead from MEMS to NEMS – nanoelectromechanical systems. Here, feature elements are well below the micron range in the realm of the nanoscale.
One example, again very relevant for IoT devices is the size of antennas. Tiny antennas also have big implications in the biomedical field. For example, they could lead to better bio-injectible, bio-implantable, or even bio-ingestible devices that monitor health.
To further miniaturize antennas, researcher managed to design and fabricate acoustically actuated ultra-compact NEMS magnetoelectric antennas. Instead of designing antennas at the electromagnetic wave resonance – so they receive and transmit electromagnetic waves - they tailored the antennas to acoustic resonance. Acoustic resonance waves are roughly 10 thousand times smaller than electromagnetic waves. This translates to an antenna that's one or two orders of magnitude smaller than even the most compact antennas available today. 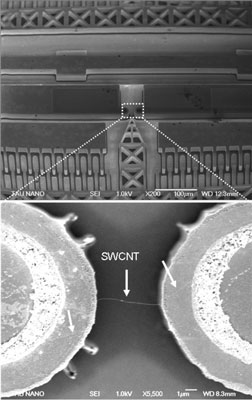 A test MEMS device with a single CNT bridging two electrodes. The fabrication process is a conventional silicon-on-insulator MEMS process, and the placement of the tube is achieved seamlessly during the CVD CNT growth. (Source: Gabriel A Karp et al 2009 J. Micromech. Microengines. 19 085021 doi: 10.1088/0960-1317/19/8/085021))
Constructing electromechanical building blocks out of nanomaterials such as carbon nanotubes are a fundamental unit process for manufacturing NEMS with sophisticated architectures and to drive several nanoscale transduction applications such as GHz-oscillators, shuttles, memories, syringes and actuators. have demonstrated exceptionally high thermal conductivity, eventually exhibiting a property known as ballistic conduction. This makes them ideal candidates for highly integrated NEMS.