Most of today's rocket engines rely on chemical propulsion. All current spacecraft use some form of chemical rocket for launch and most use them for attitude control as well (the control of the angular position and rotation of the spacecraft, either relative to the object that it is orbiting, or relative to the celestial sphere). Real rocket scientists though are actively researching new forms of space propulsion systems.
One heavily researched area is electric propulsion (EP) that includes field emission electric propulsion (FEEP), colloid thrusters and other versions of field emission thrusters (FETs). EP systems significantly reduce the required propellant mass compared to conventional chemical rockets, allowing to increase the payload capacity or decrease the launch mass. EP has been successfully demonstrated as primary propulsion systems for NASAs Deep Space 1, Japans HAYABUSA, and ESAs SMART-1 missions.
A nanotechnology EP concept proposes to utilize electrostatically charged and accelerated nanoparticles as propellant. Millions of micron-sized nanoparticle thrusters would fit on one square centimeter, allowing the fabrication of highly scalable thruster arrays.
Pretty far out are proposals that the manipulation of Casimir forces could lead to a propulsion system for interstellar spaceships. The basic idea is that if one could exploit the fact that vacuum is an energy reservoir, thanks to zero-point energy, future space travelers would have access to a limitless energy source. The only thing they need, of course, is some kind of propulsion system that harvests the required energy from the vacuum. That this is not totally crazy was demonstrated in a 1984 paper. Serious research efforts are being made in various laboratories to harness the Casimir and related effects for vacuum energy conversion (read more: "nanotechnology, the mysterious Casimir Force, and interstellar spaceships").

Radiation shielding is an area where nanotechnology could make a major contribution to human space flight. NASA says that the risks of exposure to space radiation are the most significant factor limiting humans ability to participate in long-duration space missions. A lot of research therefore focuses on developing countermeasures to protect astronauts from those risks. To meet the needs for radiation protection as well as other requirements such as low weight and structural stability, spacecraft designers are looking for materials that help them develop multifunctional spacecraft hulls.
Advanced nanomaterials such as the newly developed, isotopically enriched boron nanotubes could pave the path to future spacecraft with nanosensor-integrated hulls that provide effective radiation shielding as well as energy storage.
Another area of required radiation shielding is the protection of onboard electronics. It has been reported previously that electronic devices became more radiation tolerant when their dimensions are reduced. For example, multi-quantum well or quantum dot devices can be tens or hundreds times more radiation tolerant than conventional bulk devices. It even was shown that quantum dot/CNT-based photovoltaic devices were five orders of magnitude more resistant than conventional bulk solar cells.
Recently, a few studies on radiation effects of high energetic particles such as proton, electron, and
heavy ions on nanomaterials like carbon nanotubes and nanowires have focused on the changed structural properties of the nanomaterials after irradiation (read more: "Carbon nanotubes harden electronics for use in aerospace").

In January 2007, China successfully tested an Anti-satellite (ASAT) missile system by destroying their own defunct LEO satellite, which generated huge amounts of space debris. This ASAT test raised worldwide concerns about the vulnerability of satellites and other space assets and possibility of triggering an arms race in space.
In order to meet emerging challenges posed by such ASAT missile systems, military strategists and researchers are developing novel technologies to protect their space assets. In view of this, Raytheon Company has developed a counter measure system using quantum dots to protect space assets such as satellites from missile attacks. They have developed a decoy consisting of quantum dots of different sizes and shapes that are engineered to emit radiation having a radiation profile similar to that of the asset. 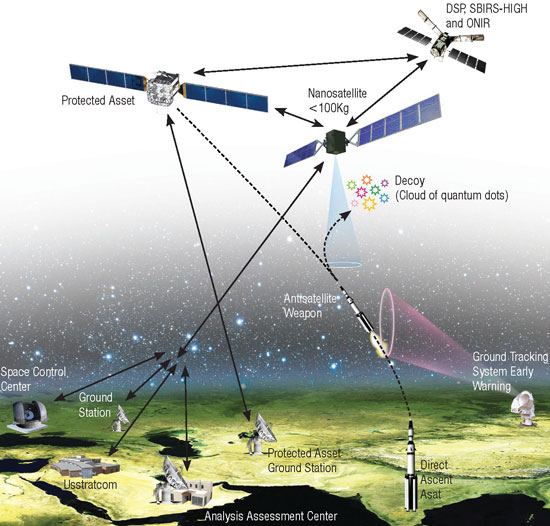 Schematic of a countermeasure system: Anti-satellite weapon seeks the decoy cloud of quantum dots instead of the target satellite.

Tie a rock to the end of a piece of ribbon, then spin it over your head. It will be pulled taut as the rock circles about. Now, imagine a ribbon 62,000 miles long, anchored near the equator with a weight on the other end. The centrifugal force of the earth's rotation will make it behave the same way. You'll end up with not only the world's biggest nunchuck, but also a kind of elevator to outer space.
A space elevator based on carbon nanotube cables is one of those ideas from 1950s-style futurism that are so whacky they might just work.
There is an annual Space Elevator Conference to discuss progress and a Japanese construction firm even has announced plans to build a space elevator by 2050.

A recent research paper published at the Center for Strategy and Technology, at the Air Force's Air War College, discusses how nanotechnology can be used to improve the design of satellites to mitigate the threats posed by ground-based directed energy weapons and high-powered microwaves. The paper states that several nations, including the U.S., Russia and China, already have either built or are developing the technology to construct ground-based directed energy weapons.

Black is black, right? Not so, according to a team of NASA engineers now developing a blacker-than pitch nanomaterial that will help scientists gather hard-to-obtain scientific measurements or observe currently unseen astronomical objects, like Earth-sized planets in orbit around other stars.
The nanomaterial being developed by a team of 10 technologists at the NASA Goddard Space Flight Center in Greenbelt, Md., is a thin coating of multi-walled carbon nanotubes. While carbon nanotubes would find use in the Space Elevator thanks to their extraordinary strength, in this application, NASA is interested in using the technology to help suppress errant light that has a funny way of ricocheting off instrument components and contaminating measurements.
MIT hosts the Space Nanotechnology Laboratory whose primary mission is to develop nano-fabrication, advanced lithography and precision engineering technology for building high performance space instrumentation, including x-ray telescopes and high resolution x-ray spectrometers, magnetospheric imagers and solar physics instrumentation.
For a more general discussion on where nanotechnology is being developed see our FAQ section.
Nanotechnology Introduction
What is nanotechnology
Nanomaterials
What are synthetic nanoparticles?
What are quantum dots?
What is graphene? (w/infographic)
Two-dimensional (2D) materials
What is nanoengineering?
What are nanobots?
What are MXenes?
What is a MOF (metal-organic framework)?
What are metamaterials & metasurfaces?
van der Waals heterostructures
Carbon Nanotubes 101
How nanoparticles are made
Nanofabrication
DNA Nanotechnology
Nanotechnology and the Concept of Friction
Atomic Force Microscopy (AFM)
Memristors
Metric Prefix Table
Nanotechnology Standards
Nanotechnology Education
Electronegativity
MEMS explained
Perovskites
Hydrogels
Transition metal dichalcogenides (TMDs)
Nanotechnology Applications
Applications of Nanomaterials
Nanobiotechnology
Nanoelectronics
Nanocoatings
Nanocomposites
Nanoplasmonics
Nanosensors
Smart Dust
Food and Agriculture
Detection of foodborne illnesses
Energy
Energy (graphene only)
Graphene Batteries
Ultracapacitors/Supercapacitors
3D Graphene
Furniture
Space
Cosmetics
Automotive Industry
Cement Industry
Construction
Displays
Nanomedicine
Fight against Alzheimer's
HIV/AIDS treatment
To fight and cure cancer
Surgery
Environment
Disaster relief and development cooperation
Green Industries
Sports Equipment
Nanotechnology Images