Graphene batteries are a type of battery that utilize graphene as a component in the electrodes. The graphene material can improve the performance of traditional batteries, such as lithium-ion batteries, by increasing the battery's conductivity and allowing for faster charge and discharge cycles. The high surface area of graphene can also increase the energy density of the battery, allowing for a higher storage capacity in a smaller size. Despite being an attractive material for battery applications, graphene batteries are still in the development stage and have not yet been commercialized on a large scale.
For example, a monolayer of graphene sufficient in size to cover an entire soccer field would weigh less than 3 grams (graphene's surface area is 2630 square meters per gram). This huge surface area associated with this small amount of graphene can be squeezed inside an AA battery, enabling battery designs with the ability to store massive amounts of charge.
However, the full potential of energy-storage devices built from graphene has yet to be realized. Many challenges remain, particularly with regard to feasible techniques for the low-cost mass production of graphene with controlled microstructure and low residual oxygen content.
We are adressing the question "what is graphene" and a more general overview of graphene energy applications in separate articles, so let's focus here specifically on graphene's application for battery technology.

How does graphene improve batteries?

Imagine a cellphone battery that stayed charged for more than a week and recharged in just 15 minutes. Unfortunately, with current technology, the performance of a lithium-ion battery is limited in two ways:
Firstly, its energy capacity – how long a battery can maintain its charge – is limited by the charge density, or how many lithium ions can be packed into the anode or cathode.
Secondly, a battery's charge rate – the speed at which it recharges – is limited by another factor: the speed at which the lithium ions can make their way from the electrolyte into the anode.
By processing graphene into electrodes (anodes and cathodes), both energy capacity and charge rate in rechargeable batteries can be improved, sometimes dramatically. The reasons are graphene's superior electrical conductivity, excellent mechanical flexibility, good chemical stability, and high surface area.
However, researchers have reported that LIBs with pristine graphene anodes cannot provide stable potential outputs, which sets obstacle for its practical applications.
To circumvent such problem and further improve the performance of graphene electrodes, researchers are developing various strategies.

Graphene electrodes are suitable for all types of batteries

Graphene has proven useful for different types of batteries, not just Li-ion batteries – redox flow, metal-air, lithium-sulfur, and lithium-metal batteries.
Since graphene can be chemically processed into various forms suitable for both the positive and negative electrodes, this enables the fabrication of all-graphene batteries with ultrahigh energy density. 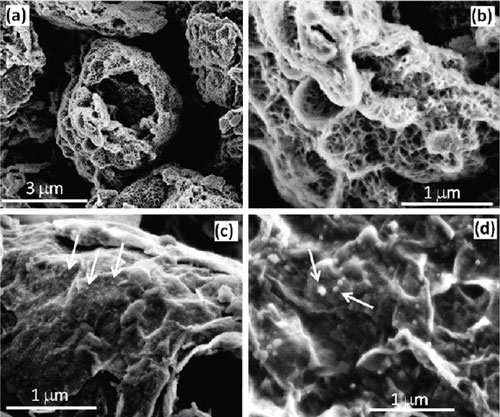 Morphologies of the graphene-based air electrode. a, b) SEM images of as-prepared functionalized graphene sheets (FGS) (carbon/oxygen (C/O) = 14) air electrodes at different magnifications. c, d) Discharged air electrode using FGS with C/O = 14 and C/O = 100, respectively. (© American Chemical Society)
Researchers have repeatedly shown the use of graphene composite materials, for instance carbon nanotube/graphene sandwiches, for high-rate lithium-sulfur batteries or to boost lithium metal batteries; or in combination with molybdenum disulfide as high-performance electrodes for sodium-ion batteries.
Even 3D-printed graphene batteries, using graphene ink, have already been demonstrated.
Another exciting development is the fact that graphene allows the fabrication of highly flexible supercapacitors and batteries as show in the image below: 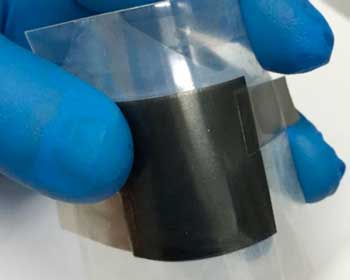 A new bendable supercapacitor made from graphene, which charges quickly and safely stores a record-high level of energy for use over a long period. (Image: Zhuangnan Li, UCL)
There is a big problem though: Although scientists have demonstrated graphene-based batteries with performance characteristics far exceeding those of commercially available ones, the lack of feasible techniques for the mass production of high-quality graphene limits their potential for practical use, for instance in mobile consumer devices.
Another issue that prevents mass production is cost. Estimates for the cost of production of graphene vary depending on the quality of the material from tens to thousands of dollars per kilogram, but it is still not competitive with state-of-the-art materials. For example, the very low cost of activated carbon currently used in supercapacitors (US$10-15 per kilogram) presents a difficult barrier to the entry of other materials.

Lithium batteries are what allow electric vehicles to travel several hundred miles on one charge. Their capacity for energy storage is well known, but so is their tendency to occasionally catch on fire – an occurrence known to battery researchers as “thermal runaway”.
The reasons lithium batteries catch fire include rapid cycling or charging and discharging, and high temperatures in the battery. These conditions can cause the cathode inside the battery — which in the case of most lithium batteries is a lithium-containing oxide, usually lithium cobalt oxide — to decompose and release oxygen. If the oxygen combines with other flammable products given off through decomposition of the electrolyte under high enough heat, spontaneous combustion can occur.
Graphene is the ideal material for blocking the release of oxygen into the electrolyte. Researchers demonstrated that if they wrapped very small particles of the lithium cobalt oxide cathode of a lithium battery in graphene, it prevents oxygen from escaping.

Your next battery may be a supercapacitor

Another technique is to use graphene as the energy-storage medium itself. This has been used to construct supercapacitors – perhaps the strongest future competitor to Li-ion batteries in uses that require very rapid charge times, such as in the case of electric cars.
This is arguably their critical feature. A supercapacitor can go from fully discharged to fully charged many orders of magnitude faster than comparable Li-ion batteries. In this context, it is the large surface area of graphene that is important, because the amount of charge that can be stored is related to the surface area of the materials from which it’s made. So again, graphene is ideal.