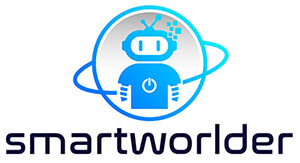 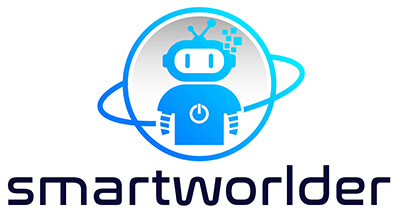 Smart Roads explained – what they are and what they do

Transportation forms the arteries for modern society and economy. The transportation of goods and people have enabled business success and created new cities. While transportation is commonly viewed as a classical civil and structural engineering problem, it is increasingly becoming digitally enabled with smart technologies.
These new technologies, under the umbrella term of smart transportation, are designed to address the current traffic problems facing large urban communities – traffic jams, accidents, pollution, fuel cost, fuel scarcity, and high insurance costs.
Part of smart transportation concepts are smart roads, a term describing road infrastructure for autonomous or connected vehicles that is integrated with advanced network and communication technologies.
Smart roads are a component of the Smart Cities concept, which applies advanced information technologies, such as Internet of Things, cloud computing, big data, and artificial intelligence, to facilitate the planning, construction, management, and services of smart cities.

There is no single smart road concept. Smart roads can rely on the combination of numerous individual technology advances to make them possible. Let’s take a look at some examples:

Several methods are being developed to harvest energy from roads. Some use sunlight (so-called solar roads) while others use mechanical vibrations produced by vehicles as they transverse the road to generate electrical energy. The energy captured on roads can be used to power streetlights, signage and traffic signals. The energy harvested can also be stored or fed to the electric power grid.

High speed weigh-in-motion (HS-WIM) technology can weigh vehicles dynamically, with speeds up to 130 kmh so that there is no need for slowing down or stopping. Furthermore, apart from gross vehicle weights, HS-WIM systems can automatically record and display wheel-load weights, axle weights, and other parameters. These systems are well-suited for weight enforcement screening, monitoring of bridge loads, toll roads and for traffic data collection.
Minimally invasive in-ground strip scales, which are high-performance strain gauges, are placed in grooves of less than 75mm in the pavement and are capable of operating over a wide range of environmental conditions. They operate on the principle of measuring the change in resistance, as they are elongated, in relation to the strain of the base (load cell) material.

Some projects already are demonstrating the use of specially assigned charging lanes for electric vehicles. The technology is being tested in a number of pilot projects, with Germany and Sweden taking the lead.
These projects are taking different technology approaches. For instance, in Sweden, about 2 kilometers of road near Stockholm has been transformed into an electrified road. It recharges the batteries of cars and trucks as they drive on the road by connecting the car to a rail system embedded in the road. It is part of Sweden’s eRoadArlanda project.
In an alternative approach, Germany is testing wireless induction systems that use coils installed under the asphalt, which transmit power into the vehicle without direct contact (the same electromagnetic induction technology is used for charging electric toothbrushes, and increasingly for mobile phones and other devices).

Traffic signs have come a long way since the automobile was invented. Traffic road signs have not changed nor have they been transformed significantly for many decades. The current analogue erect-and-display signs rely on drivers and pedestrians to see them and adhere to them.
In smart roads, analogue traffic signposts will become digital and wirelessly enabled by using a digital client-server signpost architecture with a radio transceiver. The specific sign is then broadcast wirelessly to on-coming traffic. A receiver unit residing in the car will pick up the wireless sign signal and alert (verbally or on the display) the driver about it. This entirely removes the need for drivers to watch out for signs while driving and they can focus their attention on what is happening ahead of them.

Schematic illustration of the programmable wireless digital traffic sign concept. (Image: Universitat Politècnica de València)
This new architecture yields several advantages. Firstly, wireless transmission eliminates the need for the sign to be visible to the human eye and removes the load on the driver to watch out for signs while driving on the road, among many other things that the driver should watch out for.
Secondly, it removes the burden on the driver to remember the meaning of all traffic signs since, with this architecture, the sign can be narrated via voice to inform the driver, in addition to displaying it on the dashboard or on a Heads-Up Display.
Thirdly, the wireless digital traffic sign is not affected by poor weather and lighting conditions, unlike existing traffic signs.
Fourthly, digital traffic signs are programmable, and this means changing a sign is as easy as reprogramming it. This adds great feasibility and adaptability to changes in road situations and urban constructions.
Fifthly, there is no need for the vehicle’s on-board computer systems to complex signal processing and image recognition to recognize traffic signs in real-time, which is a computationally intensive activity, and not always accurate.
Another advantage is the computation of traffic volume: Since acknowledgements sent back by vehicles on the roads to digital signs can be used to calculate the volume of traffic along the day.

Traditional methods of detecting traffic violations are done through ‘speed traps’ with cameras and speed radar detectors. These methods are less effective under rain, snow, and fog conditions.
The presence of wireless digital sigs allows the creation of new traffic violation detection methods. For examples, drivers will not be able to deny and ignore the presence of signs to traffic law enforcers, as the received and voice narrated signs will be recorded as evidence within the car’s Advanced Driver Assistance Systems (ADAS) system (read more about the state and future of ADAS in this EU white paper. Hence, driving at a speed exceeding the stated speed limit will deem to have violated the traffic code, and law enforcers have a right to fine the driver.
Similarly, refusing to stop at a stop sign will also be recorded as a violation. The changes here are that the wireless traffic signs received are recorded as proof of successful notification to the driver, and the driver cannot deny receiving it. Hence, wireless digital traffic signs will help automate the handling of traffic violations in the future. This is a new topic that requires further research in the field of intelligent transportation systems for smart cities.

Roads with V2X - cars that communicate

Vehicular ad hoc networks and car-to-car communications capability are at the core of smart road capabilities. In this context, communications from car to any roadside infrastructure is termed as V2I (examples are 802.11n, LTE traffic flow regulation road toll charging); V2V is vehicle-to-vehicle communication (alert communications and short messages, hazard warning propagation, collision avoidance); V2N is vehicle-to-network requiring mobile network operator assistance to provide access to cloud-based data and exploit edge computing features (example is cellular LTE 4G).
V2X refers to communications from the vehicle to any other object (referred to as X), which can be combinations of V2V, V2I, V2E (environment), V2P (pedestrian), V2C (cloud), V2H (Home). V2X requires no cellular connection.
V2X is important because it allows cars and objects to communicate and exchange crucial information, be it position, identity, state of physical presence or speed information. With such data, cars can be alerted about potential upcoming traffic hazards, avoiding accidents and enhancing safety for road users.

(a) V2X architecture and (b) vehicular platooning where vehicles in the rear follows the front vehicle. (Image: Universitat Politècnica de València)
V2X architecture will be highly useful in emergency rescue situations. Current call systems like eCall, OnStar and other emergency call systems use different wireless communication channels to send out an automatic crash notification alert to the local emergency call center whenever a vehicle has crashed. Call centers will then summon help and emergency services to the site of the accident. While effective, it is subject to delays and there is a lack of advance information about the severity of the accident and the conditions of those injured.
By using vehicular ad hoc networks (VANETs), the alert sent out by a crashed car can be used to alert nearby vehicles to stop or slow down, and some people can render aid whenever possible (for example, one of the drivers or passengers could be a doctor, medic or fireman). Also, V2I will enable the crash alert to be propagated to the control center and to summon for emergency service. Altogether, the simultaneous alert and notification transmissions using V2V and V2I can improve the speed of getting help to the victims at the crash site.

There are various projects that work on improving road intersection safety. Examples are the European projects Cooperative Intersection Safety that uses sensors for vehicle and object detection, along with V2I, mapping and localization technologies to reduce fatal collisions and enhance safety at road intersections. In another project, VRUITS (ITS for Vulnerable Road Users, warnings are transmitted to road users (pedestrians, cyclists and drivers) with automated braking of a car at intersections. In the smart intersection system provided by Miovision Inc., intersections are able to sense and understand roadways situation and trigger real-time responses. 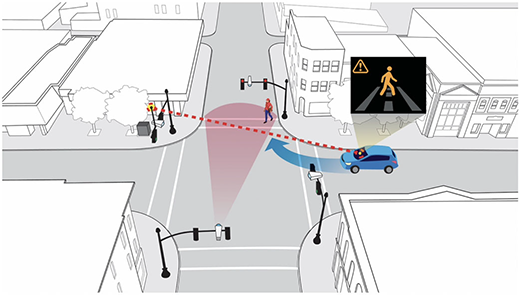 Example of intersection safety using cameras, object recognition, and V2X to warn drivers well in advance. (Image: Honda Inc. Smart Intersection Technology)
In the Smart Intersection system proposed by Honda Inc., cameras are installed at each four corners of the traffic intersection, as shown in figure. Image processing software is then used to create a 360° image of the road intersection. Artificial intelligence and object recognition software are then used to classify objects into pedestrians, motorbikes, emergency vehicles, etc. Such information is then broadcast to vehicles at both roads forming the intersection. In this way drivers’ awareness of the intersection is greatly enhanced, overcoming blind spots and potential upcoming hazards.

The first intelligent street light system was deployed in Oslo, Norway in 2006. Its purpose was to control the on-off of streetlights in order to save energy. Fast forward, some of the advances achieved today include: 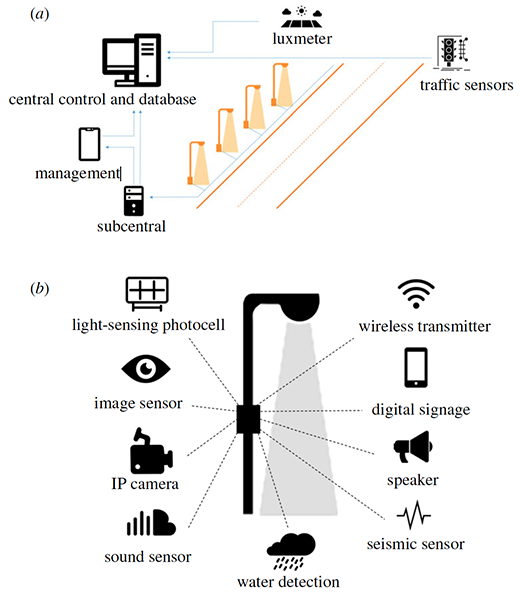 (a) The first Oslo intelligent street light system in 2006 and (b) current smart streetlight. (Image: Universitat Politècnica de València)
By adding various sensors to streetlights, a wide range of monitoring applications can be performed and integrated into smart city IoT networks: