What are ultracapacitors and supercapacitors?

The terms supercapacitor and ultracapacitor can be used synonymously. They are called super or ultra because they can store much more energy than ordinary capacitors – passive electronic devices that store electrical energy in an electric field.
Future technologies, be it wearables, IoT devices, smart meters or electric cars, require energy storage systems to have much larger storage capability, rapid charge/discharge cycling and improved endurance – ultracapacitors fit that bill.
Ultracapacitors have several advances over batteries, such as the widely used lithium-ion batteries: they can be charged and discharged within seconds; they work well in extreme temperatures; they have up to 60 times more power than batteries; they are very reliable with long lifetimes; and they are safe.

The benefits of ultracapacitors. (Image: Skeleton Technologies)
The difference comes from the fact that ultracapacitors store energy in an electric field, rather than in a chemical reaction, like batteries.
These characteristics makes supercapacitors very suitable for applications in consumer electronics, hybrid electric vehicles and industrial power management.
Batteries and ultracapacitors are complementary technologies: batteries provide energy for the long term (slow energy storage) while ultracapacitors provide fast reaction and high power to deal with demand fluctuations (fast energy storage).
Supercapacitors are ideal for demanding environments that require high power and constant cycling, such as in electric vehicles. A good example is KERS (Kinetic Energy Recovery Systems), where braking energy is stored and re-used for acceleration or lighting.
Supercapactiors fast reaction times are also ideal in environments that require a stable power quality, where even a tiny disturbance of a few microseconds in power quality can lead to huge damages without ultracapacitors to protect the equipment, infrastructure and grid with immediate response.
Ultracapacitors can be produced as small as the width of a person's fingerprint via semiconductor manufacturing processes – which makes them ideal energy sources for wearables and Internet-of-Things (IoT) devices. 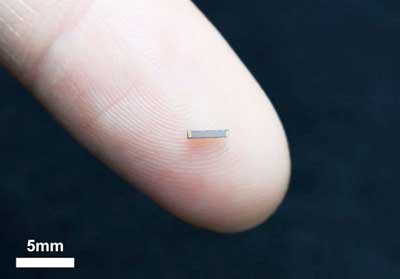 A micro supercapacitor on the tip of a person's finger. (Image: UNIST)

How Does a Supercapacitor Work?

Supercapacitors consist of two electrodes separated by an ion-permeable membrane (separator), and an electrolyte ionically connecting both electrodes. When the electrodes are polarized by an applied voltage, ions in the electrolyte form electric double layers of opposite polarity to the electrode's polarity.
A supercapacitor differs from an ordinary capacitor in two important ways: its plates effectively have a much bigger area; and the distance between them is much smaller, because the separator between them works in a different way to a conventional dielectric.
For example, positively polarized electrodes will have a layer of negative ions at the electrode/electrolyte interface along with a charge-balancing layer of positive ions adsorbing onto the negative layer. The opposite is true for the negatively polarized electrode. 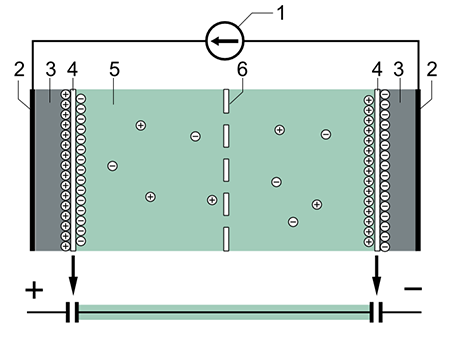 The exceptional thermal, electrical and mechanical properties of graphene make this single atomic layer of carbon a promising material for a range of applications, including energy storage.
The high specific surface area of up to 2,600 m2/g and high electrical conductivity practically cries out for use as an electrode material, especially if the graphene can be stacked into multiple separate layers. Read more: Graphene supercapacitor: Keep it moist.
When used as an electrode material, graphene greatly increases the surface area – with the same amount of material. From this aspect, graphene shows great potential for replacing conventional activated carbon – the material that has been used in commercial supercapacitors to date – which has a specific surface area between 1000 and 1800 m2/g.
A very recent development is a hybrid supercapacitor, which has a capacitor-type titanium carbide-based negative electrode and a battery-type graphene-hybrid positive electrode. The novel energy storage device reaches an energy density close to that of nickel metal hydride batteries, but while also offering supercapacitor-level ultra-high power about 10 times that of lithium batteries.
For this device, researchers combined chemically-modified graphene with a nano-structured metal organic framework, known as a MOF, which provide excellent surface characteristics for an electrode. The MOF not only acts as nano-pillars to separate the graphene layers but also stores charges through a chemical mechanism while the graphene provides electrical connections to the MOF as well as storing additional charges through a capacitive mechanism. Read more about this research: Graphene-MOF-based hybrid supercapacitor offers the best of both worlds in energy storage.
Nanotechnology Introduction
What is nanotechnology
Nanomaterials
What are synthetic nanoparticles?
What are quantum dots?
What is graphene? (w/infographic)
Two-dimensional (2D) materials
What is nanoengineering?
What are nanobots?
What are MXenes?
What is a MOF (metal-organic framework)?
What are metamaterials & metasurfaces?
van der Waals heterostructures
Carbon Nanotubes 101
How nanoparticles are made
Nanofabrication
DNA Nanotechnology
Nanotechnology and the Concept of Friction
Atomic Force Microscopy (AFM)
Memristors
Metric Prefix Table
Nanotechnology Standards
Nanotechnology Education
Electronegativity
MEMS explained
Transistors explained
Perovskites
Hydrogels
Transition metal dichalcogenides (TMDs)
Basic electronic components
Nanotechnology Applications
Applications of Nanomaterials
Nanobiotechnology
Nanoelectronics
Nanofiltration
Nanocoatings
Nanocomposites
Nanoplasmonics
Nanosensors
Smart Dust
Food and Agriculture
Detection of foodborne illnesses
Energy
Energy (graphene only)
Graphene Batteries
Ultracapacitors/Supercapacitors
3D Graphene
Furniture
Space
Cosmetics
Automotive Industry
Cement Industry
Construction
Displays
Nanomedicine
Fight against Alzheimer's
HIV/AIDS treatment
To fight and cure cancer
Surgery
Environment
Disaster relief and development cooperation
Green Industries
Sports Equipment
Nanotechnology Images