Nanomaterials are not simply another step in the miniaturization of materials or particles. They often require very different production approaches. There are several processes to create various sizes of nanomaterials, classified as ‘top-down’ and ‘bottom-up’. Although large numbers of nanomaterials are currently at the laboratory stage of manufacture, many of them already are being commercialized.
Below we outline some examples of nanomaterials and the range of nanoscience that is aimed at understanding their properties. As will be seen, the behavior of some nanomaterials is well understood, whereas others present greater challenges.

Nanoscale in One Dimension

One-dimensional nanomaterials, such as thin films and engineered surfaces, have been developed and used for decades in fields such as electronic device manufacture, chemistry and engineering.
In the silicon integrated-circuit industry, for example, many devices rely on thin films for their operation, and control of film thicknesses approaching the atomic level is routine.
Monolayers (layers that are one atom or molecule deep) are also routinely made and used in chemistry. The most important example of this new class of materials is graphene.
The formation and properties of these layers are reasonably well understood from the atomic level upwards, even in quite complex layers (such as lubricants) and nanocoatings. Advances are being made in the control of the composition and smoothness of surfaces, and the growth of films.
Engineered surfaces with tailored properties such as large surface area or specific reactivity are used routinely in a range of applications such as in fuel cells and catalysts. The large surface area provided by nanoparticles, together with their ability to self assemble on a support surface, could be of use in all of these applications.
Although they represent incremental developments, surfaces with enhanced properties should find applications throughout the chemicals and energy sectors.
The benefits could surpass the obvious economic and resource savings achieved by higher activity and greater selectivity in reactors and separation processes, to enabling small-scale distributed processing (making chemicals as close as possible to the point of use). There is already a move in the chemical industry towards this.
Another use could be the small-scale, on-site production of high value chemicals such as pharmaceuticals.

Graphene and other single- and few-layer materials

Graphene is an atomic-scale honeycomb lattice made of carbon atoms. Graphene is undoubtedly emerging as one of the most promising nanomaterials because of its unique combination of superb properties, which opens a way for its exploitation in a wide spectrum of applications ranging from electronics to optics, sensors, and biodevices.
For instance, graphene-based nanomaterials have many promising applications in energy-related areas. Just some recent examples: Graphene improves both energy capacity and charge rate in rechargeable batteries; activated graphene makes superior supercapacitors for energy storage; graphene electrodes may lead to a promising approach for making solar cells that are inexpensive, lightweight and flexible; and multifunctional graphene mats are promising substrates for catalytic systems (read more:graphene nanotechnology in energy).
Watch a great introductory video on graphene
We also compiled a primer on graphene applications and uses. And don't forget to read our much more extensive explainer What is graphene?
The fascination with atomic-layer materials that has started with graphene has spurred researchers to look for other 2D structures like for instance metal carbides and nitrides.
One particularly interesting analogue to graphene would be 2D silicon – silicene – because it could be synthesized and processed using mature semiconductor techniques, and more easily integrated into existing electronics than graphene is currently.
Another material of interest is 2D boron, an element with worlds of unexplored potential. And yet another new two-dimensional material – made up of layers of crystal known as molybdenum oxides – has unique properties that encourage the free flow of electrons at ultra-high speeds.
Two dimensional nanomaterials such as tubes and wires have generated considerable interest among the scientific community in recent years. In particular, their novel electrical and mechanical properties are the subject of intense research.

Carbon nanotubes (CNTs) were first observed by Sumio Iijima in 1991. CNTs are extended tubes of rolled graphene sheets. There are two types of CNT: single-walled (one tube) or multi-walled (several concentric tubes). Both of these are typically a few nanometers in diameter and several micrometers to centimeters long.
CNTs have assumed an important role in the context of nanomaterials, because of their novel chemical and physical properties. They are mechanically very strong (their Young’s modulus is over 1 terapascal, making CNTs as stiff as diamond), flexible (about their axis), and can conduct electricity extremely well (the helicity of the graphene sheet determines whether the CNT is a semiconductor or metallic). All of these remarkable properties give CNTs a range of potential applications: for example, in reinforced composites, sensors, nanoelectronics and display devices.
Watch an animation of various nanotubes and a fullerene (buckyball)
CNTs are now available commercially in limited quantities. They can be grown by several techniques. However, the selective and uniform production of CNTs with specific dimensions and physical properties is yet to be achieved. The potential similarity in size and shape between CNTs and asbestos fibres has led to concerns about their safety.

Inorganic nanotubes and inorganic fullerene-like materials based on layered compounds such as molybdenum disulphide were discovered shortly after CNTs. They have excellent tribological (lubricating) properties, resistance to shockwave impact, catalytic reactivity, and high capacity for hydrogen and lithium storage, which suggest a range of promising applications. Oxide-based nanotubes (such as titanium dioxide) are being explored for their applications in catalysis, photo-catalysis and energy storage.

Nanowires are ultrafine wires or linear arrays of dots, formed by self-assembly. They can be made from a wide range of materials. Semiconductor nanowires made of silicon, gallium nitride and indium phosphide have demonstrated remarkable optical, electronic and magnetic characteristics (for example, silica nanowires can bend light around very tight corners).
Nanowires have potential applications in high-density data storage, either as magnetic read heads or as patterned storage media, and electronic and opto-electronic nanodevices, for metallic interconnects of quantum devices and nanodevices.
The preparation of these nanowires relies on sophisticated growth techniques, which include self-assembly processes, where atoms arrange themselves naturally on stepped surfaces, chemical vapor deposition (CVD) onto patterned substrates, electroplating or molecular beam epitaxy (MBE). The ‘molecular beams’ are typically from thermally evaporated elemental sources.

The variability and site recognition of biopolymers, such as DNA molecules, offer a wide range of opportunities for the self-organization of wire nanostructures into much more complex patterns. The DNA backbones may then, for example, be coated in metal. They also offer opportunities to link nano- and biotechnology in, for example, biocompatible sensors and small, simple motors.
Such self-assembly of organic backbone nanostructures is often controlled by weak interactions, such as hydrogen bonds, hydrophobic, or van der Waals interactions (generally in aqueous environments) and hence requires quite different synthesis strategies to CNTs, for example.
The combination of one-dimensional nanostructures consisting of biopolymers and inorganic compounds opens up a number of scientific and technological opportunities.

Nanoparticles are often defined as particles of less than 100nm in diameter. We classify nanoparticles to be particles less than 100nm in diameter that exhibit new or enhanced size-dependent properties compared with larger particles of the same material.
Nanoparticles exist widely in the natural world: for example as the products of photochemical and volcanic activity, and created by plants and algae. They have also been created for thousands of years as products of combustion and food cooking, and more recently from vehicle exhausts. Deliberately manufactured nanoparticles, such as metal oxides, are by comparison in the minority.
Nanoparticles are of interest because of the new properties (such as chemical reactivity and optical behavior) that they exhibit compared with larger particles of the same materials.
For example, titanium dioxide and zinc oxide become transparent at the nanoscale, however are able to absorb and reflect UV light, and have found application in sunscreens.
Nanoparticles have a range of potential applications: in the short-term in new cosmetics, textiles and paints; in the longer term, in methods of targeted drug delivery where they could be to used deliver drugs to a specific site in the body.
Nanoparticles can also be arranged into layers on surfaces, providing a large surface area and hence enhanced activity, relevant to a range of potential applications such as catalysts.
Manufactured nanoparticles are typically not products in their own right, but generally serve as raw materials, ingredients or additives in existing products.
Nanoparticles are currently in a number of consumer products such as cosmetics and their enhanced or novel properties may have implications for their toxicity.
For most applications, nanoparticles will be fixed (for example, attached to a surface or within in a composite) although in others they will be free or suspended in fluid. Whether they are fixed or free will have a significant affect on their potential health, safety and environmental impacts. 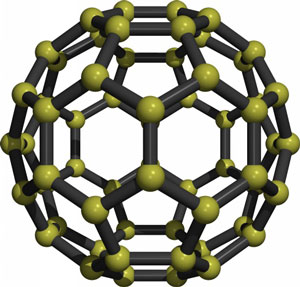 The C60 "buckyball" fullerene
In the mid-1980s a new class of carbon material was discovered called carbon 60 (C60). Harry Kroto and Richard Smalley, the experimental chemists who discovered C60 named it "buckminsterfullerene", in recognition of the architect Buckminster Fuller, who was well-known for building geodesic domes, and the term fullerenes was then given to any closed carbon cage. C60 are spherical molecules about 1nm in diameter, comprising 60 carbon atoms arranged as 20 hexagons and 12 pentagons: the configuration of a football.
In 1990, a technique to produce larger quantities of C60 was developed by resistively heating graphite rods in a helium atmosphere.
Several applications are envisaged for fullerenes, such as miniature ‘ball bearings’ to lubricate surfaces, drug delivery vehicles and in electronic circuits.

Dendrimers are spherical polymeric molecules, formed through a nanoscale hierarchical self-assembly process. There are many types of dendrimer; the smallest is several nanometers in size. Dendrimers are used in conventional applications such as coatings and inks, but they also have a range of interesting properties which could lead to useful applications.
For example, dendrimers can act as nanoscale carrier molecules and as such could be used in drug delivery. Environmental clean-up could be assisted by dendrimers as they can trap metal ions, which could then be filtered out of water with ultra-filtration techniques.

Nanoparticles of semiconductors (quantum dots) were theorized in the 1970s and initially created in the early 1980s. If semiconductor particles are made small enough, quantum effects come into play, which limit the energies at which electrons and holes (the absence of an electron) can exist in the particles. As energy is related to wavelength (or color), this means that the optical properties of the particle can be finely tuned depending on its size. Thus, particles can be made to emit or absorb specific wavelengths (colors) of light, merely by controlling their size.
Recently, quantum dots have found applications in composites, solar cells (Grätzel cells) and fluorescent biological labels (for example to trace a biological molecule) which use both the small particle size and tuneable energy levels.
Recent advances in chemistry have resulted in the preparation of monolayer-protected, high-quality, monodispersed, crystalline quantum dots as small as 2nm in diameter, which can be conveniently treated and processed as a typical chemical reagent.
Nanotechnology Introduction
What is nanotechnology
New materials: nanomaterials
What are synthetic nanoparticles?
What are quantum dots?
What is graphene? (w/infographic)
Two-dimensional (2D) materials
What is nanoengineering?
What are nanobots?
What are MXenes?
What is a MOF (metal-organic framework)?
What are metamaterials & metasurfaces?
van der Waals heterostructures
Carbon Nanotubes 101
How nanoparticles are made
Nanomaterials and Nanoscience
Nanofabrication
DNA Nanotechnology
Nanotechnology and the Concept of Friction
Atomic Force Microscopy (AFM)
Memristors
Metric Prefix Table
Nanotechnology Standards
Nanotechnology Education
Nanotechnology Applications
Applications of Nanomaterials
Nanobiotechnology
Nanoelectronics
Nanocoatings
Nanoplasmonics
Nanosensors
Food and Agriculture
Detection of foodborne illnesses
Energy
Energy (graphene only)
Graphene Batteries
3D Graphene
Furniture
Space
Cosmetics
Automotive Industry
Cement Industry
Construction
Displays
Nanomedicine
Fight against Alzheimer's
HIV/AIDS treatment
To fight and cure cancer
Surgery
Environment
Disaster relief and development cooperation
Green Industries
Sports Equipment
Nanotechnology Images