In 1959, physicist and Nobel prize laureate Richard Feynman presents "There's Plenty of Room at the Bottom" at a meeting of the American Physical Society and introduces the concept of nanotechnology – without naming it as such.
In his famous speech, Feynman talked about about the problem of manipulating and controlling things on a small scale and he asked the question: "Why cannot we write the entire 24 volumes of the Encyclopædia Britannica on the head of a pin?"
He offered a prize of $1000 "to the first guy who makes an operating electric motor - a rotating electric motor which can be controlled from the outside and, not counting the lead-in wires, is only 1/64 inch cube."
Feynman had hoped his reward would stimulate some new fabrication technology but he was quite consternated when one year later, Bill McLellan, using amateur radio skills, built the motor with his hands using tweezers and a microscope (and many, many hours of fiddling around). McLellan's 2000 rpm motor weighed 250 micrograms and consisted of 13 parts. 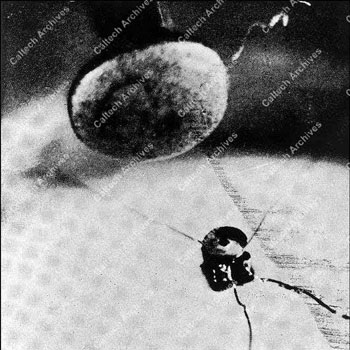 The McLellan micromotor photographed under a microscope. The large blob on top is a pinhead. (Image: Caltech Archives)
In the almost 50 years since, not only has the field of microelectromechanical systems (MEMS) caught up with Feynman's bet and achieved commercial production capabilities of motors many times smaller than McLellan's, but researchers have begun exploring another level of miniaturization - nanoelectromechanical systems (NEMS).
10 things you should know about nanotechnology