The only industry where nanoscale manufacturing technologies are employed on a large scale is the semiconductor industry where device structures have reached the single nanometers scale. Of course, the chemical industry has long been working with nanoscale particles and pigments, but this falls more into the realm of chemistry than nanomanufacturing.
Proponents of 'atomically precise manufacturing' and 'molecular manufacturing' love to talk about the mind-boggling possibilities that these technologies would offer. These visions range from the modest, such as improved materials and more efficient production methods for chemicals (already on the horizon), to the outrageous, such as molecular desktop fabs (far, far out).
Articles about revolutionary nanotechnology almost always skip the hard part, i.e. the tremendous amount of research breakthroughs that are required to get from where we are today to the promised land. It's as if some flight enthusiasts in 1903, when Orville Wright took off on the first powered flight, would have debated first class cabin design of 600-seat jet airliners flying New York - Tokyo non-stop.
Nanoscientists today are still struggling with very basic problems such as being able to control the synthesis of nanoparticles. It might come as a bit of a shock to the nanotechnology enthusiasts among you, but even something utterly fundamental as synthesizing metal nanoparticles today is more of an empirical trial and error approach than a predictable, fully controlled process.

As Bubba in Forrest Gump pointed out, there are lots of possibilities with shrimps: "You can barbecue it, boil it, broil it, bake it ... there's ah... pineapple shrimp, lemon shrimp, pepper shrimp, shrimp soup, shrimp stew, shrimp salad, shrimp burger, shrimp sandwich...that's about it." It sounds pretty much the same when you listen to researchers talking about the numerous strategies for synthesizing nanoparticles – you can barbecue it (well, kind of), boil it, broil it, bake it ... there's ah... sonochemical processing, cavitation processing, microemulsion processing, and high-energy ball milling.
The problem is that, no matter what route you choose, nanoparticle synthesis is normally quite a tricky process that requires a lot of skill and expertise on the part of the chemist to obtain good quality particles of well controlled size and shape. And there is a long way from nanoparticle production to nanomanufacturing of complex structures or even fully functioning nano-devices. 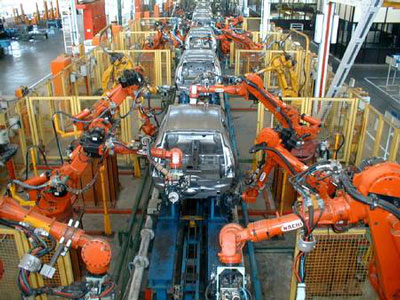 Fully automated assembly line.
The term manufacturing generally conjures up industrial production facilities with more or less fully automated assembly lines. Until the twentieth century, a single craftsman or team of craftsmen would normally create each part of an industrial product individually and assemble them together into a single item, making changes in the parts so that they would fit together and work together; the so-called English System of manufacture.
Then Henry Ford came along and in 1907-08 developed the assembly line for his Model T automobile. This innovation revolutionized not only industry but also our society because it allowed mass production of industrial goods at much lower cost than before. At its core, an assembly line is a manufacturing process in which interchangeable parts are added to a product in a sequential manner to create a finished product.
Nanotechnology techniques today are pretty much where the industrial world was before Ford's assembly line – a domain of craftsmen and not of mass production. 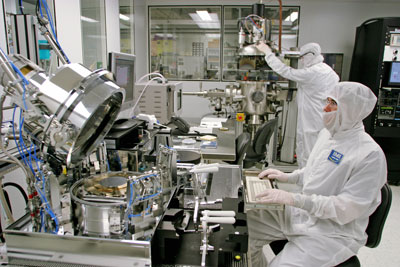 Lab space at the nanoimprint lithography prototyping facility at Canada's Industrial Materials Institute (NRC-IMI).
There are different ways of manipulating matter at the nanoscale. The two notions you hear most are top-down and bottom-up methods.

Michelangelo was a top-down artist. He took one big, raw block of Carrara marble and after years of chiseling away produced a spectacular statue like David. In the process he reduced the original block of marble to half its original volume and left the other half as waste.
This is the nanotechnology equivalent of lithography and other top-down methods where you start by taking a block of material and remove the bits and pieces you don't want until you get the shape and size you do want. In the process you spend (relatively much) energy, use (sometimes very toxic) chemicals, produce (often quite a bit of) waste, need a lot of patience (these processes are relatively slow) and often the results are quite unique and not easily replicable. 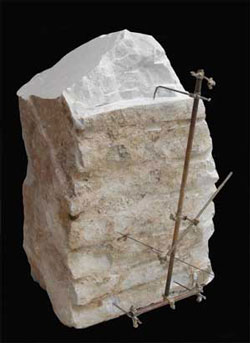 Marble - before and after Michelangelo's top-down approach.
Bottom-up methods are much more elegant and efficient. Take lego blocks. Just pick the shape and sizes you need and – one by one – build more or less anything you want with them. Replace your hands with a (tiny) machine, or some other assembly process, and the legos with atoms or molecules and you have molecular assembly. Unfortunately, this analogy is too simplistic.
To make things a bit more complicated, there are two fundamentally different ways of fabricating things from the bottom up. And this is where a lot of the confusion about the different nanotechnology terminology comes from.

One bottom-up method is nature's way: self-assembly. Self-organizing processes are common throughout nature and involve components from the molecular (e.g. protein folding) to the planetary scale (e.g. weather systems) and even beyond (e.g. galaxies).
The key to using self-assembly as a controlled and directed fabrication process lies in designing the components that are required to self-assemble into desired patterns and functions. Self-assembly reflects information coded - as shape, surface properties, charge, polarizability, magnetic dipole, mass, etc. - in individual components; these characteristics determine the interactions among them.
On a very small scale you wouldn't even use the term 'self-assembly' but rather 'chemical synthesis' – the processes chemists have refined over many years. However, the stability of covalent bonds enables the synthesis of almost arbitrary configurations of only up to 1000 atoms. Larger molecules, molecular aggregates, and forms of organized matter more extensive than molecules cannot be synthesized bond-by-bond. Self-assembly is one strategy for organizing matter on these larger scales (Source).
This technique can be summarized as follows: We have no clue why certain atoms and molecules self-assemble the way they do, but once we can initiate and control the process we can use it to build structures from the bottom-up – atom by atom.
Self-assembly has become an especially important concept in nanotechnology. As miniaturization reaches the nanoscale, conventional manufacturing technologies fail because it has not been possible yet to build machinery that assembles nanoscale components into functional devices. Until robotic assemblers capable of nanofabrication can be built, self-assembly – together with chemical synthesis – will be the necessary technology to develop for bottom-up fabrication (read: "Mind the gap - nanotechnology robotics vision versus lab reality").
Exploiting nature's self-assembly tricks is real science and it's happening in labs already. As a matter of fact, it's actually about to lead to real world products. A recent example is IBM's announcement of self-assembling structures in their airgap processors.
Self-assembly is also the reason why nanotechnologies have such a profound impact on the chemical industry. One example is the huge area of polymers used for industrial products (think plastics). Chemists are using molecules' tendency to self-align to design molecular structures with specific properties.
Once you know how certain nanoparticles behave and what properties they possess you can use this knowledge to deliberately create structures with desired properties. This is a much more efficient way than the cement mixer chemistry of old where you mix compounds in a more or less arbitrary way based on best guesses and see what materials you get and then try figure out what you could do with them.

The other way of doing bottom-up nanotechnology is man's way: molecular assembly. It sounds like self-assembly but it is a very different concept. If you take a look at the nanofactory animation 'Molecular desktop manufacturing Productive Nanosystems: From Molecules to Superproducts' you'll get the idea.
This is the vision that proponents or revolutionary nanotechnology put forward: molecular assembly as a factory concept, assembly lines and all, just scaled down to the nano level. The notion of 'self-assembly' becomes relevant in this context with regard to 'self-replicating' nanomachines, i.e. machines that self-assemble themselves; but this is very different from the type of self-assembly found in nature.
There is one - very big - catch though: Today, universal molecular assembly is a vision; in a scientific sense it is not even a theoretical concept yet.
With our technical capabilities today, the most advanced bottom-up nanotechnologies are a combination of chemical synthesis and self-assembly. But they already allow us to perform atomically precise manufacturing on a modest scale and this will lead to vastly improved materials, much more efficient manufacturing processes and entirely new medical procedures.
And we haven't seen the end yet of where nanotechnology "doing it nature's way" will lead. Recent developments in DNA-based nanotechnology have shown the suitability of this novel assembly method for constructing useful nanostructures. DNA molecules can serve as precisely controllable and programmable scaffolds for organizing functional nanomaterials in the design, fabrication, and characterization of nanometer scale electronic devices and sensors. Maybe we will never have, and never need, molecular assembly modeled after today's factories.
10 things you should know about nanotechnology