There are plenty of examples of nanomaterials we could write about – nanoparticles, quantum dots, nanowires, nanofibers, ultrathin-films etc. One example, though, that is exemplary of how an 'old' material gets an exciting new life through nanoscale technologies is the element carbon.
Carbon – a nonmetallic, solid element that occurs in all organic life – is the basis of organic chemistry. It has the interesting chemical property of being able to bond with itself and a wide variety of other elements, forming nearly 10 million known compounds. Natural carbon can exist in two very different types and is know to everyone: graphite and diamond. Three additional forms of carbon that were discovered between 1985 and 2004 have caused the current excitement among researchers about carbon nanomaterials – fullerenes, carbon nanotubes, and in particular graphene. 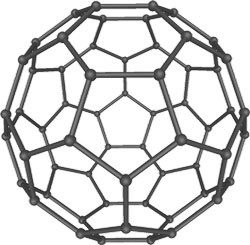 Fullerene
Fullerenes are spherical carbon-cage molecules with sixty (C60) or more carbon atoms. They measure about 0.7-1.5 nm in diameter. They are fascinating for scientists because they show unusual properties for carbon materials. Fullerenes are studied for potential medical use: they are strong antioxidants; one could also bind specific antibiotics to the structure to target resistant bacteria and even target certain cancer cells such as melanoma. Heat resistance and superconductivity are some of the more heavily studied properties of fullerenes in mechanical engineering.
Fullerenes, which sometimes are mistakenly called a "new form of carbon", have been found to exist in interstellar dust as well as in geological formations on Earth. The discovery that carbon could form stable, ordered structures other than graphite and diamond stimulated researchers worldwide to search for other new forms of carbon. This lead to the discovery of carbon nanotubes (CNTs). They are quite different from fullerene-type materials and they have rather different properties.
For starters, you could watch these five short videos about carbon nanotubes:
Carbon nanotubes (CNTs) are produced ranging from single to tens of nanometers in diameter and several micrometers in length. They have outstanding mechanical and electronic properties and are good thermal conductors. The tensile strength, or breaking strain of CNTs is 6-7 times that of steel. They are among the stiffest and strongest fibers known.
CNTs can be metallic or semiconducting depending on their structure. Some CNTs are the most efficient electrical conductors ever made, while others behave more like silicon. These properties, coupled with the lightness of carbon nanotubes, give them great potential for use in reinforced composites, nanoelectronics, sensors and nanomechanical devices.
CNTs can have one or more walls. Single-walled CNTs exhibit different electrical properties than multiwalled CNTs and are prime candidates for applications in nanoelectronics. In general commercial applications have been rather slow to develop, primarily because of the still relatively high production costs of the best quality nanotubes, especially single-walled ones.
One of the futuristic applications of carbon nanotubes is the Space Elevator - the idea that a cable-based transport system could become an alternative to rockets for launching people and payload into space.
The newest member of the carbon nanomaterial club is graphene. Discovered only in 2004, graphene is a flat one-atom thick sheet of carbon. Existing forms of carbon basically consist of sheets of graphene, either bonded on top of each other to form a solid material like the graphite in your pencil, or rolled up into carbon nanotubes (think of a single-walled carbon nanotube as a graphene cylinder) or folded into fullerenes.
Physicists had long considered a free-standing form of planar graphene impossible; the conventional wisdom was that such a sheet always would roll up. The reason scientists are so excited is that two-dimensional crystals (it's called 2D because it extends in only two dimensions - length and width; as the material is only one atom thick, the third dimension, height, is considered to be zero) open up a whole new class of materials with novel electronic, optical and mechanical properties.
10 things you should know about nanotechnology