Let's start with the basics: Nano comes from the Greek word for dwarf. The prefix nano means a factor of one billionth (10-9) in the metric system and can be applied, e.g., to time (nanosecond), volume (nanoliter), weight (nanogram) or length (nanometer or nm). In its popular use nano refers to length, and the nanoscale usually refers to a length from the atomic level of around 0.1 nm up to 100 nm. Nanostructures or nanomaterials are forms of matter at the nanoscale.
To give you an idea how small this is, if you line up 7 oxygen atoms or 3-4 water molecules, you'll get about one nanometer. But that's hard to imagine either. How about this: a red blood cell is approximately 7,000 nm wide. Or, to use a beaten-to-death comparison: a single hair from you head is about 50,000 - 100,000 nm thick. Want more? 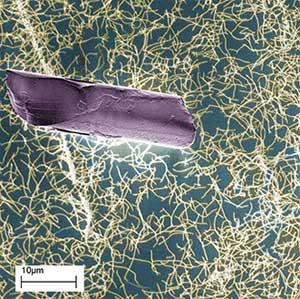 Human hair fragment (the purplish thing) on top of a network of single-walled carbon nanotubes (Image: Jirka Cech)
Ok, you get the message. It is really, really hard to imagine things so small, no matter how convoluted the example; like this (very last) one: Precisely positioning a one nanometer sized structure inside a line that is one meter long is analogous to being able to exactly position a peppercorn in the distance between New York and Miami (or if you prefer, between Copenhagen and Madrid, or Tokyo and Beijing).
By the way, we've devoted a Spotlight on this issue of perception of the nanoworld here: "Shaking hands with a virus - getting all touchy-feely with nanotechnology ".
Often thrown together as nanotechnology, we need to differentiate between science and technnology. There is nanoscience, which is the study of phenomena and manipulation of material at the nanoscale, in essence, an extension of existing sciences into the nanoscale. Then there is nanotechnology, which is the design, characterization, production and application of structures, devices and systems by controlling shape and size at the nanoscale.
Nanotechnology should really be called nanotechnologies: The term broadly refers to such fields as biology, physics or chemistry, any scientific field really, or a combination thereof, that deals with the deliberate and controlled manufacturing of nanostructures.
And finally – there is no such thing as "a nanotechnology". What we call nanotechnology is not an industry; nor is it a single technology or a single field of research. It consists of sets of enabling technologies applicable to many traditional industries (therefore it is more appropriate to speak of nanotechnologies in the plural). You often hear nanotechnologies described as platform technology – these are technologies that are so pervasive that they serve as springboards for other technologies and as foundations for many diverse applications; they are also regarded as essential for progress in multiple fields.
Computer operating systems are a good example for a platform technology. Rather than having to deal with computer hardware directly, programmers work with an abstraction of the underlying hardware (the operating systems) to build diverse applications from games to control software for nuclear power plants. In a similar fashion, nanotechnologies will allow the precise control of individual atoms and molecules, leading to an unprecedented ability in many diverse areas to develop new materials, devices or solutions.
Ok now, so where did nanotechnology start and what exactly are nanotechnologies? Well, there is no universal nanotechnology definition. One of the problems facing nanotechnology in the public eye is the confusion about its definition.
Early proponents of molecular manufacturing used the term to describe nanoscale machinery – motors, computers, autonomous robots (even self-replicating ones), and personal nanofactories a la Star Trek replicators – and some of them then got quite miffed as the term increasingly got expanded to include anything that has to do with observing, measuring or manipulating matter on the nanoscale. As a matter of fact, though, the person attributed with coining the term nanotechnology in 1974, Norio Taniguchi, didn't use it for sci-fi type machinery but to describe semiconductor processes such as thin film deposition and ion beam milling exhibiting characteristic control on the order of a nanometer.
Today, most definitions revolve around the study and control of phenomena and materials at length scales below 100 nm. Some definitions include a reference to molecular systems and devices and nanotechnology 'purists' argue that any definition of nanotechnology needs to include a reference to "functional systems". The inaugural issue of Nature Nanotechnology back in 2006 asked 13 researchers from different areas what nanotechnology means to them and the responses – from enthusiastic to skeptical – reflect a variety of perspectives. Pick your favorite.
10 things you should know about nanotechnology