Governments are spending a lot of money on funding nanotechnology research and development. Estimates for worldwide public investment into nanotechnology projects in 2008 are well over $6 billion.
For instance, the latest 2010 budget in the U.S. provides $1.6 billion for the National nanotechnology Initiative (NNI), reflecting steady growth in the NNI investment. The European Union currently spends about 740 million Euros (roughly $1.1 billion) annually in public funding for nanotechnology research. Under the Seventh Framework Programme (FP7), running from 2007 to 2013, funding for nanotechnology related projects is expected to reach €3.5 billion. Add to that investments made by individual countries.
Japan government funding for nanotechnologies is about $700m .Russia has started a multi-billion dollar program with Rusnano, and, although there are no public figures, you can assume that China is putting quite a bit of money into the field as well.
International private sector funding - both corporate and venture capital - is also on the rise, with an estimated $7 billion in 2007 (up from $5 bn in 2005). Thereof, the latest data for the private sector show that Venture Capital (VC) firms invested $702 million in nanotechnology start-ups last year across 61 deals, slightly down from $738 million across 73 deals in 2006. 90% of that activity took place in the U.S. The remaining billions are corporate investments from firms like IBM, BASF or Mitsubishi (and many more).
This means that currently, worldwide annual total public and private sector funding for nanotechnologies is about $13-14 bn. 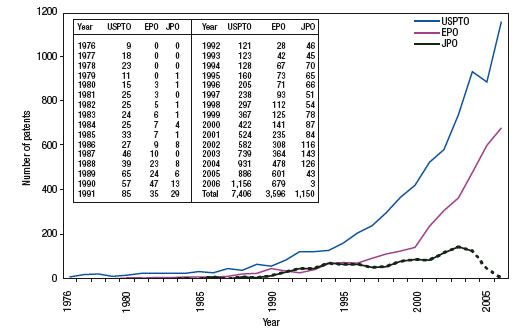 Number of nanotechnology patents published by the US Patent and Trademark Office (USPTO), European Patent Office (EPO) and Japan Patent Office (JPO) according to publication date. The drop in the number of USPTO patents in 2005 is due to the USPTO enforcing a stricter definition of nanotechnology. The decline in the number of JPO patents for 2005 and 2006 is due to the delay between the publication and granting of patents at the JPO. Source: (Trends in nanotechnology patents)

There are now hundreds of thousands of papers written every year on nanoscience and nanotechnology topics. And it appears the growth trend continues unabated. China not only shows the fastest growth but now produces the most nanoscience/nanotechnology publications in absolute terms as well. 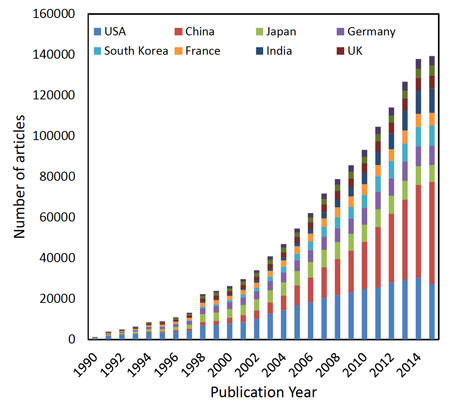