One potential problem with nanotechnologies is how it is being implemented and commercialized. Whereas for instance with nuclear energy you either build a nuclear power plant or you don't and the introduction of the new technology is a very deliberate, hotly debated, and distinct act, nanotechnologies are creeping into our lives more or less unnoticed and to a large degree unquestioned. Many people haven't heard about it or don't care enough to get informed about it. Sure, there are activist groups that call for a moratorium on the use of nanoparticles in consumer products; toxicologists are increasing their research efforts on nanomaterials; and government bodies are struggling to become knowledgeable about it and debate the need for new regulations.
Nevertheless, nanotechnology research is pushing full steam ahead, fueled by billions of dollars of research funding every year. And industry is picking the most promising research results for commercialization in its effort to improve its products. The electronics industry, being well on its way to become a nanotechnology industry, is an excellent example of how this "nanotechnology creep" is happening, unquestioned and well accepted by consumers (see our example in chapter 3).
Nevertheless, nanotechnologies will cause massive technological change - although in tiny steps. The list of potential issues is long - privacy concerns arising from invasive use of nanoelectronic devices or devastating new military technologies are just some of the examples - but one area that will see a plethora of ethical, moral, economic, regulatory and medical dilemmas and conflicts is nanomedicine.
In a trend that already has started in professional sports, the ever increasing appearance of internal and external enhancements of the human body – driven by lucrative and big business sport disciplines on one hand and the medical technology to deal with injuries on the other – enables a culture of increasing demand for, and acceptance of, improvements to and modifications of the human body (structure, function, abilities) beyond its species-typical boundaries.
Terms like health, disease, therapy and medicine will have to be radically redefined. Just take one example: once nanotechnology-enabled biosensing techniques are able to identify individual cancer cells inside the body, when do we say that a person is suffering from cancer? Already with one cell (everyone is carrying abnormal cells)? With 100 cells? A million? When does a person's status change from 'healthy' to 'sick'? What implications does that have for, say, the cost of their health insurance? 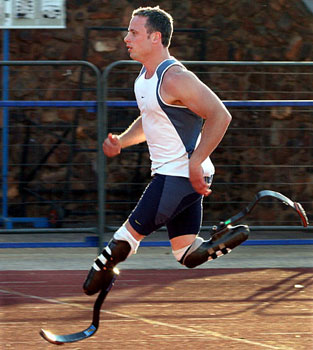 A plethora of problems arises in the area of human enhancements as exemplified by the Pistorius case. While Pistorius – also known as the "Blade Runner" – made a virtue out of necessity (his need for artificial legs), the modern history of sport shows that there are always athletes who will do anything to run faster, jump higher or hit that ball further. Performance enhancement, legal or illegal, already is no longer limited to doping. For instance, laser surgical procedures to improve eyesight are common among top athletes. These are not just corrections of bad eyesight to reach the standard 20/20 vision but they go beyond. The golfer Tiger Woods reportedly used LASIK to improve his vision to 20/15, meaning he can see at 20 meters, what the average person can only see at 15.
Exemplary for this trend is the transhumanist model of health that sees enhancement beyond species-typical body structures and functioning as therapeutic interventions. In this model, all Homo sapiens – no matter how conventionally 'medically healthy' – are defined as limited, defective, and in need of constant improvement made possible by new technologies; a little bit like the constant software upgrades we do on our computers. 'Health' in this model means having obtained maximum (at any given time) enhancement (improvement) of one's abilities, functions, and body structure.
Nanotechnology will have a big impact on bionics (read: "Nanotechnology, transhumanism and the bionic man"), a field that effectively bridges the interface between electronics and biology. Nanomedical and bionic products that could directly improve sensory, motoric and other functions cover all aspects of the human body. A 2002 report by the U.S. National Science Foundation ("Converging Technologies for Improving Human Performance"; pdf download) describes several nanotechnology-based areas for the improvement of human health and capabilities in the next 10-20 years. These visions go far beyond the current implant technologies (bionic ears and limbs, neural and retinal implants, artificial muscles, nanotechnology skin for prosthetic arms, etc) under development:
Nano-Bio Processor – A device for programming complex biological pathways on a chip that mimics responses of the human body and aids the development of corresponding treatments. An example would be the precise "decoration" of nanoparticles with a tailored dosage of biomolecules for the production of nanomedicines that target specific early biomarkers indicative of disease.
Self-Monitoring of Physiological Well-Being and Dysfunction Using Nano Implant Devices – One outcome of combining nanotechnology with biotechnology will be molecular prosthetics - nano components that can repair or replace defective cellular components such as ion channels or protein signaling receptors. Another result will be intracellular imaging, perhaps enabled by synthetic nano-materials that can act as contrast agents to highlight early disease markers in routine screening. Through self-delivered nano-medical intervention, patients in the future will be able in the comfort of their homes to perform noninvasive treatments autonomously or under remote supervision by physicians.
Nano-Medical Research and Intervention Monitoring and Robotics – Nano-enabled unobtrusive tools will be invaluable for medical intervention, for example, nanorobots accomplishing entirely new kinds of surgery or carrying out traditional surgeries far less invasively than does a surgeon's scalpel.
Brain-to-Brain and Brain-to-Machine Interfaces – One goal is to establish direct links between neuronal tissue and machines that would allow direct control of mechanical, electronic, and even virtual objects as if they were extensions of human bodies. Researchers are already closing in on this sci-fi sounding scenario.
The question of whether medical and electronic nanotechnologies should be used to make intentional changes in or to the body when the change is not medically necessary is just one hot topic in a long list of concerns.
The good news is that these questions are being asked, but there is still much work to be done, but despite the enormous promise of nanomedicine, and the considerable funding going into the field, the research into the ethical, legal and social implications of nanomedicine is comparatively minute.
As Peter Singer wrote in his 2003 tutorial Mind the gap: science and ethics in Nanotechnology: "The science leaps ahead, the ethics lags behind." As with nanotechnology in general, there is danger of derailing nanomedicine if the study of ethical, legal and social implications does not catch up with scientific developments.
Of course, societal issues regarding nanotechnologies go beyond just medicine. Here is a good selection of reports on the issues involved.
10 things you should know about nanotechnology