It has become quite a familiar pattern for regular readers of nanoscience and nanotechnology literature: on some days you see articles that slam certain nanomaterials, and nanotechnology in general, as inherently risky due to a new scientific paper that reports alarming levels of toxicity of a particular nanoparticle. On other days you find research papers that report no apparent risk whatsoever with the same nanomaterials.
These reports then get cherry-picked by various interest groups to fit their agendas – the cosmetics industry for instance claims their products and the nanoparticles in them are perfectly safe; environmental groups contend that nanomaterials are inherently risky and that rigorous testing is needed before large scale commercialization of nanoproducts can happen; some even call for a complete moratorium on nanomaterial production.
The result is a situation that is confusing as hell not only for laypersons but also for industry, researchers and the journalists who cover the field. Fact is, that every new technology is inherently risky – plenty of people are being injured or killed every year by electricity, cars, chemicals, or nuclear energy, just to name a few. In order to reap the benefits of a new technology and make it acceptable to society there has to be a general perception that the risks are fully understood, can be managed and it is clear who is responsible for what. All of that is currently missing in nanotechnology.
Although the speed and scope of nanotechnology risk research – and the emerging field of nanotoxicology – is picking up, a lot of this work is stand-alone research that is not being coordinated within a larger framework (read: Nanotechnology risk assessment could benefit from nanoparticle categorization framework").
In order to discuss the risks of nanotechnology, we need to take a closer look at these nanostructures. The mere presence of nanomaterials is not in itself a threat; as a matter of fact, nanoparticles exist in nature. It is only certain aspects that can make them risky, in particular their mobility and their increased reactivity. Only if certain properties of certain nanoparticles were proven harmful to living beings or the environment would we be faced with a genuine hazard.
Natural and Anthropogenic Sources of Nanoparticles (<100nm) 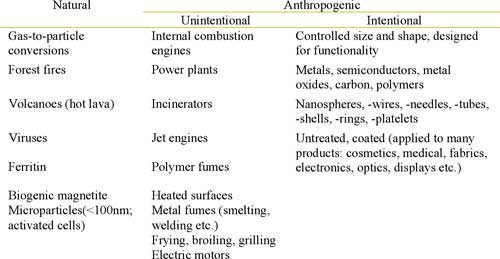 Potential for release and exposure to nanoscale substances (Source: Oberdörster; Reproduced with permission from Environmental Health Perspectives)
The environmental, health, and safety (EHS) risks of a nanomaterial may differ by characteristics such as size, shape, and surface chemistry, among others.

Characteristics of a nanomaterial that could affect risk include its particles’ (1) size, (2) distribution of sizes in a group of particles, (3) shape, (4) surface area, (5) likelihood of forming agglomerates (clumps of particles bound together), and (6) surface chemistry including surface composition, shape, or chemical reactivity. (Source: GAO) (click on image to enlarge)
In addressing the EHS impact of nanotechnology we need to differentiate two types of nanostructures:
1) Nanocomposites, nanostructured surfaces and nanocomponents (electronic, optical, sensors etc.), where nanoscale particles are incorporated into a substance, material or device ("fixed" nano-particles); and
2) "Free" nanoparticles, where at some stage in production or use individual nanoparticles of a substance are present. These free nanoparticles could be nanoscale species of elements, or simple compounds, but also complex compounds where for instance a nanoparticle of a particular element is coated with another substance.
There seems to be consensus that, although one should be aware of materials containing fixed nanoparticles, the immediate concern is with free nanoparticles.

The extraordinarily high numbers of nanoparticles per given mass will likely be of toxicological significance when these particles interact with cells and subcellular components. Likewise, their increased surface area per unit mass can be toxicologically important. (Source: Source: G. Oberdörster et al.: "Nanotoxicology: An Emerging Discipline Evolving from Studies of Ultrafine Particles" Environmental Health Perspectives Volume 113, Number 7, July 2005. Reproduced with permission from Environm. Health Persp.)
Because nanoparticles are very different from their everyday counterparts – thanks to surface and quantum effects – their adverse effects cannot be derived from the known toxicity of the macro-sized material. This poses significant issues for addressing the health and environmental impact of free nanoparticles.
To complicate things further, in talking about nanoparticles it is important that a powder or liquid containing nanoparticles is almost never monodisperse, but will contain a range of particle sizes. This complicates the experimental analysis as larger nanoparticles might have different properties than smaller ones. Also, nanoparticles show a tendency to aggregate and such aggregates often behave differently from individual nanoparticles.
Potential for release and exposure to nanoscale substances 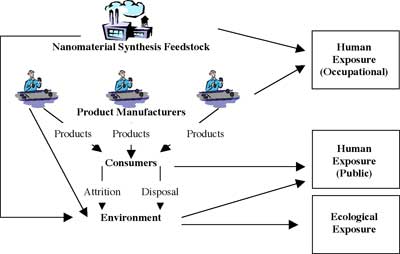 There are four entry routes for nanoparticles into the body: they can be inhaled, swallowed, absorbed through skin or be deliberately injected during medical procedures. Once within the body they are highly mobile and in some instances can even cross the blood-brain barrier. How these nanoparticles behave inside the organism is one of the big issues that need to be resolved.
Basically, the behavior of nanoparticles is a function of their size, shape and surface reactivity with the surrounding tissue. They could cause "overload" on phagocytes, cells that ingest and destroy foreign matter, thereby triggering stress reactions that lead to inflammation and weaken the body's defense against other pathogens.
Apart from what happens if non- or slowly degradable nanoparticles accumulate in organs, another concern is their potential interaction with biological processes inside the body: because of their large surface, nanoparticles on exposure to tissue and fluids will immediately absorb onto their surface some of the macromolecules they encounter. Can this, for instance, affect the regulatory mechanisms of enzymes and other proteins?
For instance, there are ongoing studies that are investigating whether the amount of free radicals formed on the surface of nanoparticles is sufficient to induce cellular effects. Read more about nanoparticles, free radicals and oxidative stress here with an overview about what free radicals are, how they originate, why organisms need them, how they are neutralized, and what we know about the connection between nanoparticles and free radical production.

Not enough data exists to know for sure if nanoparticles could have undesirable effects on the environment. Two areas are relevant here:
1) In free form nanoparticles can be released in the air or water during production (or production accidents) or as waste byproduct of production, and ultimately accumulate in the soil, water or plant life.
2) In fixed form, where they are part of a manufactured substance or product, they will ultimately have to be recycled or disposed of as waste. We don't know yet if certain nanoparticles will constitute a completely new class of non-biodegradable pollutant. In case they do, we also don't know yet how such pollutants could be removed from air or water because most traditional filters are not suitable for such tasks (their pores are too big to catch nanoparticles).
To properly assess the health hazards of engineered nano-particles the whole life cycle of these particles needs to be evaluated, including their fabrication, storage and distribution, application and potential abuse, and disposal. The impact on humans or the environment may vary at different stages of the life cycle.
One term you hear quite often in discussion about the potential risks of nanotechnology is precautionary principle. This moral and political principle, as commonly defined, states that if an action or policy might cause severe or irreversible harm to the public or to the environment, in the absence of a scientific consensus that harm would not ensue, the burden of proof falls on those who would advocate taking the action.
The principle aims to provide guidance for protecting public health and the environment in the face of uncertain risks, stating that the absence of full scientific certainty shall not be used as a reason to postpone measures where there is a risk of serious or irreversible harm to public health or the environment.
In contrast to the U.S., much of the science and technology policy in Europe is guided by the Precautionary Principle (see:"Late lessons from early warnings for nanotechnology"), although critics argue that this contributes to the high level of bureaucracy and red tape that prevents European companies from speedily translating the continent's leading-edge nanotechnology research into commercial products.
10 things you should know about nanotechnology