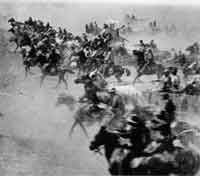 The Oklahoma land rush of 1889 and similar land runs were events in which previously restricted land of the United States was opened for homesteading on a first come, first claim basis. A number of the individuals who participated in the run entered early and hid out until the legal time of entry to lay quick claim to some of the most choice homesteads. These people came to be identified as "sooners" and their actions led to hundreds of legal contests. Nowadays, universities and companies, from start-ups to multinational conglomerates, are rushing to aggressively stake out their turf in the nanotechnology patent area. The "sooners" in this nanotechnology patent land rush may be the ones who were issued what some say are "unduly broad" patents early on, in the hope of getting a windfall of nanotechnology intellectual property (IP) rights. While not violating the rules intentionally, upon re-examination some broad patents might not hold up to the United States Patent Act's requirement for full and complete disclosure. This uncertainty provides fertile grounds for possible litigation over nanotechnology patent claims based on broad and unprecise definitions and descriptions. Efforts are underway to address some of these problems.

Carbon nanotubes (CNTs) belong to the most exciting nanomaterials discovered so far and the buzz associated with them has to do with their amazing properties. Depending on their structure, they can be metals or semiconductors. They exhibit extraordinary mechanical properties, which make them extremely strong materials with good thermal conductivity. Their tensile strength is several times that of steel. These characteristics have generated strong interest in their possible use in reinforced composites, nanoelectronics, nanomechanical devices, circuits and computers. Single-wall nanotubes (SWNTs) are an intriguing variant of carbon nanotubes because they exhibit important electrical properties that are not shared by the multi-walled carbon nanotubes (MWNT). SWNTs are the most likely candidate for miniaturizing electronics toward the nanoscale. Because of their enormous commercial potential, universities, start-ups, and corporations have aggressively sought patent protection on nanotube-based products. A recent legal paper identifies key patents claiming compositions of matter, methods of production, and products incorporating nanotubes. The authors summarize potential patent invalidity arguments that may be raised against certain patents in the field and explain how the patent landscape impacts the commercialization of nanotube-based products. A proposed "Nanotube Patent Forum" could be a means for industry to facilitate cost-effective licensing transactions between patent holders and manufacturers.

The patent land grab in nanotechnology continues unabated, creating problems down the road

The race to patent anything related to nanotechnology continues to produce a flood of patents in the U.S., with the number of patents on average growing by over 30% every year since 2000.