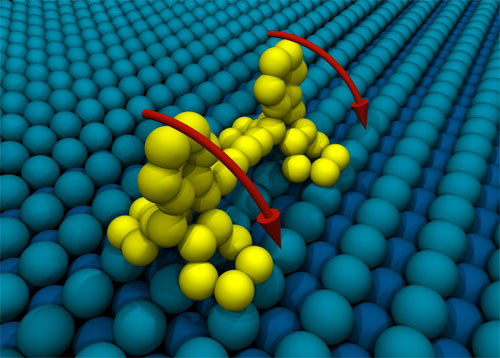 The invention of the wheel was one of the most significant events in human history. It has been at the origin of major scientific and technological developments: from the creation of astronomical clocks or calculating machines to motor-drawn vehicles and other motor cars. At the molecular scale, the smallest at which a wheel can be created, it represents a major challenge for chemists and physicists. For years, scientists have been working on the design of molecular machines equipped with wheels. After observing the random rotation of a flat molecular wheel in 1998, designing and synthesizing a mono-molecular wheelbarrow in 2003 and then synthesizing a molecular motor in 2005, a European group of researchers managed to operate the first molecular rack with a pinion of 1.2 nm in diameter. They controlled the rotation of a 0.7 nm diameter wheel attached to a 0.6 nm-long axle in a molecule. This molecular 'wheel' could revolutionize machinery built at the nanoscale. Nanowheel rotation has been claimed before, but never shown directly.

A large number of DNA-based nanomechanical devices have been described, controlled by a variety of methods: These include pH changes and the addition of other molecular components, such as small molecule effectors, proteins and DNA strands. The most versatile of these devices are those that are controlled by DNA strands: This versatility results because they can be addressed specifically by strands with particular sequences; these strands can be added to the solution directly, or perhaps they can result from another process ongoing within the local environment. Researchers have now shown that the state of a DNA-based nanomechanical device can be controlled by RNA strands, which means that nanomechanical devices could potentially be run from transcriptionally derived RNA molecules.

Back in 2001, Swedish researchers developed techniques for creating complex two- and three-dimensional networks of nanotubes and micrometer-sized containers from liquid crystalline lipid bilayer materials based on the propensity in liposomes to undergo complex shape-transitions under mechanical excitations. The membrane composition and container contents can be controlled allowing chemical programming of networks in studies of enzyme kinetics, reaction-diffusion phenomena, and single-biomolecule detection. Materials contained in the networks can be routed among containers. Thus, networks of nanotubes and vesicles serve as a platform to build nanofluidic devices operating with single molecules and particles and offer new opportunities to study chemistry in confined biomimetic compartments. The networks can furthermore be used to build nanoscale chemical laboratories for applications in analytical devices as well as to construct computational and complex sensor systems that can also be integrated to living cells. In recent work, the researchers have now demonstrated that these nanotube-container networks can be constructed directly from plasma membranes of cultured cells.

Sophisticated biomolecular motors have evolved in nature, where motor proteins actively control the delivery and assembly of materials within cells. In contrast, the development of synthetic nanomotors is in its infancy. Such nanomotors are currently explored for an increasing number of applications in hybrid bionanodevices. Along these lines, gliding motility assays, where reconstituted microtubule filaments are propelled over a substrate by surface-attached motor proteins, have been used to transport micro- and nanosized objects, such as small beads, quantum dots or DNA molecules. However, one prerequisite for controllable nanotransport is the reliable guiding of filament movement along predefined paths, a challenging task that has recently been achieved only via costly and labor-intensive topographical surface modifications. Researchers have now demonstrated a novel approach for the nanostructuring of surfaces with functional motor proteins. In contrast to all other current methods, their approach allows the three-dimensionally oriented deposition of proteins on surfaces, being the result of first binding them to the highly oriented and regulated structures of microtubules and then transferring them to the surface.

DNA computing is a form of computing which uses DNA and molecular biology instead of the traditional silicon-based computer technologies. Molecular computation is currently focused on building molecular networks analogous to electrical engineering designs. These networks consist of logic gates, which perform Boolean logical operations such as AND, NOT, and OR on one or more inputs to produce an output. While individual molecular gates and small networks have previously been constructed, these gates are yet to be integrated at higher levels of complexity. Such integration in electrical engineering arises from massive parallelism and interconnections, rather than fundamental component complexity. The ability to truly integrate molecular components remains crucial for the construction of next-generation molecular devices. Researchers have now succeeded in building a medium- scale integrated molecular circuit, integrating 128 deoxyribozyme-based logic gates, 32 input DNA molecules, and 8 two-channel fluorescent outputs across 8 wells.

The promise of biomolecular motors

In the field of Nanotechnology, where inherent risks are the subject of hot debate, developments within the nascent science of biomolecular motors is hailed by scientists to be relatively benign to humans and possibly beneficial to the environment (even for applications within the military). Biomolecular motors are currently an area of fundamental research, with working applications years in the future. Biological organisms on the micro and nano scales have always used the mechanism of converting ATP (Adenosine Tri-Phosphate - the universal fuel molecule that powers all cells) into mechanical energy. Therefore an existence proof that this concept could fare very well has existed for millennia. Today's question is: "how to manufacture engineering devices powered by ATP?"

Researchers at the University of Illinois at Urbana-Champaign constructed a DNA-based nanomechanical device called the nanometronome.

New research findings substantially improve the yields in the fabrication of devices with molecular monolayers active channels and significantly reduce the density of defects caused by metal penetration.