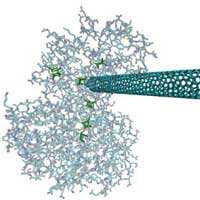 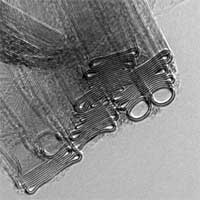 Tie a rock to the end of a piece of ribbon, then spin it over your head. It will be pulled taut as the rock circles about. Now, imagine a ribbon 62,000 miles long, anchored near the equator with a weight on the other end. The centrifugal force of the earth's rotation will make it behave the same way. You'll end up with not only the world's biggest nunchuck, but also a kind of elevator to outer space. A space elevator is one of those ideas from 1950s-style futurism that are so whacky they might just work. The single most difficult task in building the Space Elevator is achieving the required tether strength-to-weight ratio - in other words, developing a material that is both strong enough and light enough to support the 60,000 mile long tether. This material has become available in the form of carbon nanotubes (CNTs). The challenge ahead is to weave these raw CNTs into a useful form - a space worthy climbable ribbon. Assembling carbon nanotubes into commercially usable fibers is still one of the many challenges that nanotechnology researchers are faced with when trying to exploit the amazing properties of many nanomaterials. Apart from ambitious large-scale projects like the space elevator, CNT-based fibers will have many applications, from protective fabrics and coatings in military applications, higher performance materials for sports equipment to transparent conductive films and, eventually, as a replacement for copper wire in transmitting electrical power and signals. Researchers in the UK are making good progress in developing scalable fabrication techniques for high performance CNT fibers.

The challenge of integrating fragile nanostructures into functional devices 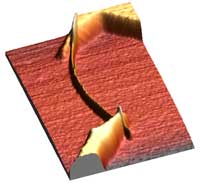 We have written Spotlight after Spotlight pointing out the numerous challenges that researchers are facing with regard to nanofabrication. Uncountable research papers have been written about the numerous methods available for synthesizing nanomaterials. What today is called 'nanofabrication' deals with the issues of fabricating complex and functional nano- and microstructures by integrating these synthesized nanomaterials. To complicate matters, many of these nanomaterials are fragile, either because they are composed of a limited number of atomic layers or because they are 'soft', i.e., of biological or molecular nature. This fragile nature of some materials creates a major headache: how to integrate them at an individual level into devices without altering their structure and, consequently, their properties during device fabrication. Currently, researchers use mainly e-beam lithography and, in some cases, focused ion beam to fabricate devices which incorporate nanostructures. These methods have been proven to be very useful, for example for investigations of carbon nanotubes. However, they can not be applied on fragile nanostructures, because they damage or contaminate the structures - this could result from exposure to high energy particle beams; the requirement for lift-off steps; exposure to chemicals, etc. Researchers have now shown that individual nanostructures can be integrated into functional devices using dynamic nanostenceling which allows the integration of individual nanostructures into devices using entirely scanning probe based methods and without exposure to damaging conditions, such as high-energy charged particles, heat, or resists. 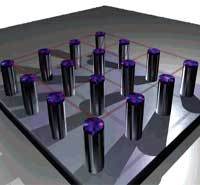 A team of researchers have come up with an inexpensive way of making complex networks of carbon nanotubes that can be stamped onto circuit boards. They were able to create an inexpensive and relatively simple method for creating these predefined networks. The scientists arranged silicon pillars in the shape of the network they wanted and then coated the top of the pillars with silicon dioxide. The suspended single-walled carbon nanotubes adhered to the tops of pillars, growing taut and straight. A Raman spectroscopy (RS) laser not only assigned specific properties to each individual nanotube, it was also capable of destroying any unwanted nanotubes.

Slowly but surely the realization begins to sink in that there is no quick buck to be made for individual investors in nanotechnology companies (except for the people pushing investment advice of course). Existing public nanotechnology firms as a group have performed sub-standard (to put it politely); there isn't exactly a flood of nanotech IPOs on the horizon; and many product advances that have to do with nanotechnologies are made by large companies which either make these advances silently (witness the cosmetics industry) or tout them as major breakthroughs (like IBM's 'airgap' technology). In any case, all these nanotechnology-based materials are incremental improvements over existing materials - leading to better coatings, more efficient batteries and fuel cells, better performing materials, etc. - and not revolutionary devices. Of course, when we look back 10 years from now, there will have been one or two great performing nanotech stocks (I will tell you in 2017 who they are); but then there will be one or two great performing stocks in almost any other investment sector. Nevertheless, there are many start-ups and early stage companies out there - some might even make it to the IPO (initial public offering) stage or be bought by larger companies - and given the nature of the field, with its broad and multidisciplinary character, it certainly is helpful for the professional investor to be able to gauge the nanotechnology investment landscape from a technology perspective. A recent article describes a methodology to categorize different nanotechnologies into one of three types: passive, active, or hybrid nanotechnologies, each with different time horizons for expected commercial viability. 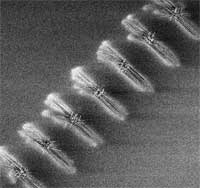