How much money would you pay to live forever? $100? $1,000? $100,000,000,000? Keeping in mind that forever is a long time; you could certainly arrange some kind of longterm loan, since you'd have plenty of time to make the payments. Historically, only religions have the lock on immortality. Thus guided by divine inspiration and a codicil transcribed directly from God, most religions profess the rebirth of consciousness after the body is disposed of. Well, guess what? There are some nanotechnologists who claim that in a few decades, death will be a choice rather than a requirement. Let's see how we can come to this rather heretical conclusion. Intel is already manufacturing devices with feature sizes about 20 nanometers across. A red blood cell is on the order of 10,000 nanometers across. In 2 dimensions we could stack about 250,000 components in the same space as a red blood cell. If the trends continue as far as 2017, which may be the end-point of Moore's Law we could be looking at a manufactured device the size of a red blood cell with 256,000,000 components. If we add the third dimension, that could translate into 65,536,000,000,000,000 components. Somewhere along the way, we're talking about the raw technical capability to produce a rather sophisticated robot small enough to wander around through your body doing whatever it has been programmed to do. The real question is, how practical is this speculation?

Shaking hands with a virus - getting all touchy-feely with nanotechnology 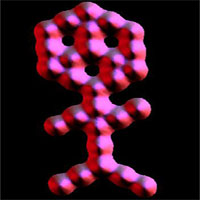 Our sense of touch connects us to the world around us and is an integral part of how we experience things, both physically and emotionally. In the virtual world of remote-control robots, scientific models or computer games, users generally lack tactile, or haptic (from the Greek word Haphe, pertaining to the sense of touch), feedback, which either makes delicate manipulative tasks difficult or keeps the subject purely visual and often inscrutable (an electron microscope image of a nanoscale object, for instance). The desire for natural and intuitive human machine interaction has led to the inclusion of haptics in man-machine interfaces. The user is able to control inputs to the system through hand movements and in turn receives feedback through tactile stimulation in the hands. Sophisticated, state-of-the-art haptic user-interface software is capable of adding interactive, realistic virtual touch capabilities to human-computer interactions. Among the uses are medical applications, remote vehicle or robotic control, military applications, and video games. Users are said to feel realistic weight, shape, texture, dimension, dynamics, and force effects. Applying the use of real-time virtual reality and multisensory user interface to nanoscience, scientists in France have begun to open up the otherwise only scientifically described reality of the nanoworld to a non-scientific public.

As Bubba in Forrest Gump pointed out, there are lots of possibilities with shrimps: "You can barbecue it, boil it, broil it, bake it ... there's ah... pineapple shrimp, lemon shrimp, pepper shrimp, shrimp soup, shrimp stew, shrimp salad, shrimp burger, shrimp sandwich...that's about it." It sounds pretty much the same when you listen to researchers talking about the numerous strategies for synthesizing nanoparticles - you can barbecue it, boil it, broil it, bake it (well, kind of) ... there's ah... sonochemical processing, cavitation processing, microemulsion processing, and high-energy ball milling. The problem is that, no matter what route you choose, nanoparticle synthesis is normally quite a tricky process that requires a lot of skill and expertise on the part of the chemist to obtain good quality particles of well controlled size and shape. Researchers in the UK tried to see if they could automate the whole procedure by preparing the nanoparticles in automated chemical reactors under the direct control of a computer. If successful, such reactors would find numerous applications in nanoscience and nanotechnology, especially in the areas of photonics, optoelectronics, bio-analysis and targeted drug delivery.

Having just re-read Richard Feynman's 20-year old autobiography titled Surely You're Joking, Mr. Feynman! (Adventures of a Curious Character) I thought it makes for a great little Nanowerk Spotlight leading into the weekend - and it won't be about nanotechnology. Feynman's 1959 lecture "Plenty of room at the bottom" is probably the most famous and most quoted physics speech ever and it is the one thing that most non-scientists associate with his name. Feynman, who received the Nobel Prize in Physics in 1965 for his work on on quantum electrodynamics, participated in the Manhattan Project and was a member of the panel that investigated the Space Shuttle Challenger disaster in 1986. He taught physics, first at Cornell and later at the California Institute of Technology. In typical Feynman fashion, a major factor in his decision of chosing CalTech over other institutions was a desire to live in a mild climate, a goal he chose while having to put snow chains on his car's wheels in the middle of a snowstorm in Ithaca, New York. What makes this book such a gem is the weird and wacky collection of anecdotes that Feynman serves up when leading us through his childhood, education and career. Whether he learns how to pick locks and crack safes, plays the bongo drums in an orchestra, gets a commission to paint a naked female toreadore, or competes in a samba competition during Carnival in Rio, the book is not about physics, but the physicist. Underneath all these hilarious stories, though, are recurring leitmotifs of curiosity, tenacity, and total disrespect for ideas that have no grounding in science. For everyone who is quoting Feynman's speech, or who is reading it, this autobiography goes a long way explaining the unconventional mind behind his revolutionary ideas.

Forecasting technological developments is notoriously tricky. Many futurologists choose a safe 50 to 100 years timeframe to make sure they are dead, and the book royalties spent, when the forecasts are due (or they skip the science part altogether and write science fiction). A few months ago we introduced you to a "Detailed Roadmap of the 21st Century", a year by year bullet point list of notable advances expected to happen in the 21st century. There is no wiggling out - the names of the people or organization making a forecast is attached to it. Already there are some missed forecasts - 8 out of 13 since 2001. Then there is another type of forecast, favored by some consultants and investment advisors, that attempts to predict the dollar value of product markets within a timeframe much shorter than that of futurologists and sci-fi writers. Although this group of forecasters develops elaborate models and methodologies, the outcome is equally dubious. A third type of forecast might be the most useful; here, the input comes from the group of people who live and breath the technology every day - the companies developing, building and selling products and services. Of course, the focus of this type of forecast necessarily becomes increasingly blurry as well as it looks into the future, but it tends to avoid the hyperbole and a lot of the speculative nature of other types of forecast. A recent UK study provides a purely industry-led forecast for nanotechnologies and examines industry's existing opinion of the economic potential for nanotechnologies.