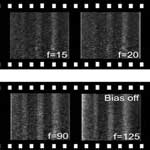 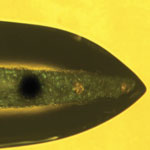 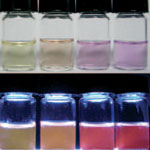 In physics, a plasmon is the quasi-particle resulting from the quantization of plasma oscillations just as photons and phonons are quantizations of light and sound waves, respectively. As the name indicates, surface plasmons are those plasmons that are confined to surfaces. The control of these surface plasmons has become increasingly attractive for optical signal processing, surface enhanced spectroscopy and sensor nanotechnology. The plasmonic properties of nanoparticles depend on various parameters such as their size or shape, and the refractive index of the environment. Surface plasmons form the basis of localized surface plasmon resonance (LSPR) sensing, which allows the detection of single molecules. Researchers have now demonstrated for the first time that the absorption and emission properties of few-atom metal nanoclusters respond dramatically to changes in the chemical environment. 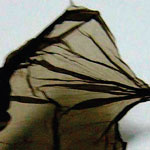 Buckypaper - in which CNTs collectively behave as a random web - is characterized by its optical transparency, mechanical flexibility, high electric conductivity, uniform dimensions, tunable electronic properties, large specific surface area and smooth surface topology. All of which make this a very promising material as functional element or structural component in a wide range of applications such as optoelectronics, nanocomposites, chemical separations, biocompatible platforms, electronics, and energy conversion and storage. So far it has been difficult to simultaneously retain the intrinsic properties of individual CNTs and to have versatility in creating different shapes, both problems unavoidably resulting from post-growth fabrication processes. A research group in China has now reported a simple approach for the direct and nondestructive assembly of multi-sheeted, single-walled carbon nanotube book-like macrostructures (buckybooks) of several millimeters in thickness with good control of the nanotube diameter, the sheet packing density, and the book thickness. 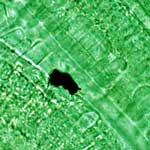 Most of the nanotoxicology research currently undertaken deals with the potential risk aspects that various nanomaterials might pose for the human body. So far, the mechanisms of nanoparticle phytotoxicity - the ability to cause injury to plants - remain largely unknown and little information on the potential uptake of nanoparticles by plants and their subsequent fate within the food chain is available. Research in this area is fairly scant, and among the few studies available, none have used major food crops or carbon nanoparticles. The interaction between nanoparticles and plants currently is poorly understood. Unlike mammalian species, plants have thick and porous cell walls and a vascular system for water and nutrients uptake. Plants in natural environment can also conduct photosynthesis. How nanoparticle uptake and their accumulation may impact on plant structure and their biological and biochemical processes remains a question. The few studies available in this field are probably only touching the tip of the iceberg. A team of scientists at Clemson University has now undertaken an effort to shed light on the impact of nanomaterials on high plants, filling a significant knowledge gap in the current literature. 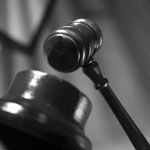 A new PhD dissertation 'Regulation and Risk Assessment of Nanomaterials - Too Little, Too Late?' by Steffen Foss Hansen from DTU Environment at the Technical University of Denmark finds that key pieces of the current European legislation are inadequate when it comes to regulating nanomaterials in the short and the long term. Hansen furthermore finds that the chemical risk assessment framework is inadequate to timely inform policy-makers about the health and environmental risks of nanomaterials, if not in the short term, then most definitely, in the long term. The aim of the PhD dissertation was threefold: 1) Investigate whether existing regulation is adequate in the short and the long term, 2) Explore the feasibility of risk assessment for the purpose of dealing with the complex emerging risks of nanomaterials and finally; 3) Provide recommendations on how to govern nanotechnologies.

Observing all the intermediate steps of a chemical reaction 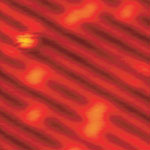 Over the past 25 years, Scanning Tunneling Microscopy (STM) has brought us extremely detailed images of matter at the molecular and atomic level. STM, which is a non-optical technique, works by scanning an electrical probe over a surface to be imaged to detect a weak electric current flowing between the tip and the surface. The STM allows scientists to visualize regions of high electron density and hence infer the position of individual atoms and molecules on the surface of a lattice. Researchers also believe that the strength of time-lapsed high-resolution STM work to unravel complex surface reactions would allow them to achieve one of the 'Holy Grails' within the area of surface science, which is to directly observe chemical reactions at the atomic scale. A research team in Denmark has now shown that, by means of high-resolution STM studies in conjunction with density functional theory calculations, it is possible to follow the intermediate steps of a complex oxidation reaction. 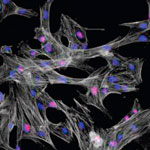 In the quest to make bone, joint and tooth implants almost as good as nature's own version, scientists are turning to nanotechnology. Researchers have found that the response of host organisms to nanomaterials is different than that observed to conventional materials. While this new field of nanomedical implants is in its very early stage, it holds the promise of novel and improved implant materials. One recent example is the nanopatterning of metal surfaces that promises to lead to superior medical implants. A multidisciplinary team of scientists have demonstrated that a simple and inexpensive chemical treatment can create nanopatterns on the surface of different implantable metals, such as Titanium, Tantalum, and CrCoMo alloys.