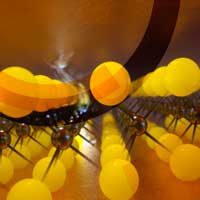 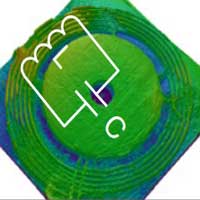 Radio-frequency wireless sensors are essential components of smart objects and internet-of-things components. However, these passive microsensors suffer from poor quality of data and sensitivity due to the environments they operate in and the need for sensors with extremely small footprints. Researchers have recently shown that a wireless system locked to an exceptional point (EP) can enhance the sensitivity of passive wireless sensors in practical applications. New work has theoretically introduced and experimentally demonstrated a new class of parity-time-symmetric RF electronic and telemetric systems, which combine EPs with divergent points.

The goal of the electronics industry has always been to build durable devices with stable performance that last a very long time. 'Transient electronics', however, are designed with the exact opposite goal: to dissolve harmlessly into their surroundings after functioning for a certain amount of time. The fabrication process and the in vivo powering of medical implants that are only made from biodegradable materials are two of the challenges associated with transient electronics. Researchers demonstrate wirelessly powered, frequency-selective magnesium microstructures as promising candidates to be used as power receiver, microheaters and triggering elements for biodegradable implantable medical devices.

New work provides insight into the control over phase and ordering during halide perovskite epitaxial growth and expands the selection of photoactive materials for growing epitaxial halide perovskites that can be exploited in high-performance electronic applications. Hybrid organic-inorganic halide perovskite has attracted tremendous attention as an exceptional new class of semiconductors for solar harvesting, light emission, lasing and thin-film electronics. However, the toxicity of lead devices and lead manufacturing combined with the instability of organic components have been two key barriers to widespread application. Tin-based inorganic halide perovskites have been considered promising substitutes for their lead analogues.