Electronics will undergo revolutionary changes as the relatively novel disciplines of spintronics, nanoelectronics, and quantum computing come of age. A fundamental link between these fields can be established using molecular magnetic materials and, in particular, single-molecule magnets. Researchers have now demonstrated how to noninvasively graft a single-molecule magnet onto a carbon nanotube nanoelectromechanical system and probe the molecular nanomagnet with the carbon nanotube's mechanical motion.

Flexible electronics are all the rage these days. They promise an entirely new design tool like for instance, tiny smartphones that wrap around our wrists, and flexible displays that fold out as newspapers or large as a television; or photovoltaic cells and reconfigurable antennas that conform to the roofs and trunks of our cars. This article reviews the progress in single-walled CNT and graphene-based flexible thin-film transistors related to material preparation, fabrication technique and transistor performance control, in order to clarify the possible scale-up methods by which mature and realistic flexible electronics could be achieved.

Nanopaper transistors for the coming age of flexible and transparent electronics

The coming age of wearable, highly flexible and transparent electronic devices will rely on essentially invisible electronic and optoelectronic circuits. In order to have close to invisible circuitry, one must have optically transparent thin-film transistors. In order to have flexibility, one needs bendable substrates. Researchers have now now fabricated transistors on specially designed nanopaper. They show that flexible organic field-effect transistors (OFETs) with high transparency and excellent mechanical properties can be fabricated on tailored nanopapers. 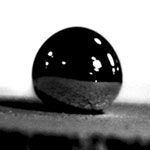 Chemical and analytical processes using channel-based microfluidics have many advantages, such as the reduced use of chemical reagents and solvents; precisely controlled reaction condition; much shortened reaction time; and the ability to integrate into a digital device. However, it is difficult with channel microfluidics to handle just a single droplet. In contrast with the microchannel-based fluidics, the manipulation of discrete droplets without using channels is a new field. Here, a liquid droplet is not confined to a closed channel and there is no risk of it being adsorbed on a channel wall. A 'liquid marble' coated with micro- or nanoparticles is a novel kind of microfluidic device, one that is especially useful for handling single liquid droplet. Researchers have now come up with the idea of developing 'liquid metal marbles' when they wanted to develop a flexible conductive system for electronic and electromagnetic units.