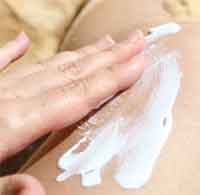 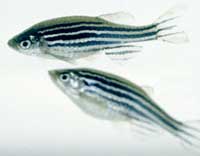 What do humans have in common with the pinky-sized tropical zebrafish that zip around in many hobbyists' home aquariums? Well, surprising as it may be, quite a lot actually. Zebrafish share the same set of genes as humans and have similar drug target sites for treating human diseases. For this reason, scientists, when turning to a model-organism to help answer genetic questions that cannot be easily addressed in humans, often chose the zebrafish (Danio rerio) - and save a few mice in the process. Zebrafish are small, easy to maintain, and well-suited for whole animal studies. Furthermore, its early embryonic development is completed rapidly within five days with well-characterized developmental stages. The embryos are transparent and develop outside of their mothers, permitting direct visual detection of pathological embryonic death, mal-development phenotypes, and study of real-time transport and effects of nanoparticles in vivo. Therefore, zebrafish embryos offer a unique opportunity to investigate the effects of nanoparticles upon intact cellular systems that communicate with each other to orchestrate the events of early embryonic development. In a new study, researchers explore the potential of nanoparticles as in vivo imaging and therapeutic agents and develop an effective and inexpensive in vivo zebrafish model system to screen biocompatibility and toxicity of nanomaterials. Such real-time studies of the transport and biocompatibility of single nanoparticles in the early development of embryos will provide new insights into molecular transport mechanisms and the structure of developing embryos at nanometer spatial resolution in vivo, as well as assessing the biocompatibility of single-nanoparticle probes in vivo. 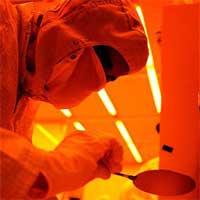 Nanotechnology risks - where are we today?

New technology, whether it is a novel cancer treatment or an innovative approach to making a new material, almost always comes with risk. Nanotechnologies are no different. Certain nano-fabrication techniques employ toxic chemicals, the production of carbon nanotubes results in dangerous byproducts, and the big question as to what degree certain engineered nanoparticles could be harmful to humans and the environment has not been answered yet. The potentially adverse health effects of fine and ultrafine particles have been studied for decades. However, at the core of the nanotoxicological debate is the fact that nanoparticles are not just a smaller version of certain particles, but they are very different from their everyday counterparts with regard to their physical properties and catalytic activities. Thus their adverse effects cannot simply be derived from the known toxicity of the macro-sized material. One useful contribution to moving the nanotoxicology discussion further along came from the 1st Nobel Forum Mini-Symposium on Nanotoxicology that was held in Stockholm, Sweden. The event's program was devoted to the topic of definitions and standardization in nanotoxicological research, as well as nano-specific risk assessment and regulatory/legislative issues. A group of international experts presented examples of recent and ongoing studies of carbon-based nanomaterials, including single-walled carbon nanotubes, using a wide range of in vitro and in vivo model systems. This Spotlight will provide you with some highlights and conclusions from this exciting meeting.

Toxicity of nanoparticles in aquatic environments 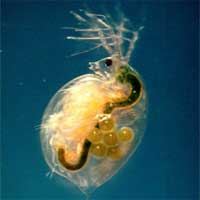 The much heralded nanotechnology revolution is not happening with a big bang that completely turns our lives upside down, but rather in a creeping stealth mode where many ordinary everyday products, from cosmetics and textiles to electronic devices, sporting goods and car paint increasingly contain engineered nanoparticles. Sometimes, these nanoparticles are just a smaller version of the material already used in a product, for instance zinc oxide in sunscreen lotions, sometimes these particles are a new addition to a product, as for example fullerenes added to oil lubricants to improve their performance. This trend of increasing use of engineered nanoparticles in commercial products raises the question of what happens at the end-of-life stage of these products, when they get disposed or recycled. Is there is a risk of these nanoparticles being released into the environment? And if yes, is there a risk of these nanoparticles causing harm? This is an area of nanotechnology risk research that remains largely unexplored. In a groundbreaking study to determine the effects of nanoparticles on aquatic organisms, scientists at the University of Wisconsin's Great Lakes Water Institute in Milwaukee have demonstrated that all nanoparticles are not created equal - at least when it comes to their effects on aquatic organisms. They have also discovered that existing attitudes toward the safety of titanium dioxide may be dangerous. 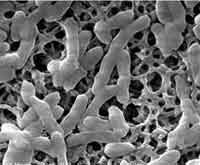 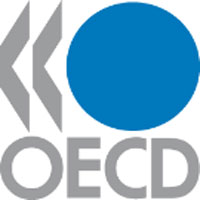 The Organization for Economic Co-operation and Development (OECD) is an intergovernmental organization in which representatives of 30 industrialized countries in North America, Europe and the Asia and Pacific region, as well as the European Commission, meet to co-ordinate and harmonize policies, discuss issues of mutual concern, and work together to respond to international problems. Most of the OECD's work is carried out by more than 200 specialized committees and working groups composed of member country delegates. The OECD's Environment, Health and Safety Division has taken up the safety of nanomaterials as one of their priority issues. After several preliminary meetings in 2005 and 2006, the OECD's Chemical Committee set up a Working Party to address the health and environmental safety implications of manufactured nanomaterials (the WPMN). After a meeting in Berlin, Germany earlier this year, the WPMN has just released a document that compiles information provided by member countries and other delegations on current developments on the safety of manufactured nanomaterials in their countries or organizations and also on current activities related to nanotechnologies and nanomaterials in other International Organizations such as the International Organization for Standardization (ISO). The report makes clear that there are numerous projects and initiatives going on with regard to nanotechnology safety research. It would be nice at some point to see all these research results come together in one coherent and conclusive set of results as to where and what the risks are and how they will be controlled and managed.