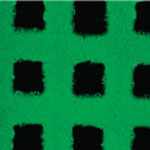 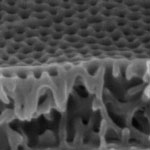 Separation and purification of bio-molecules such as proteins and viruses are important processes in the biotechnology industry. The risk of contamination with either known or unknown viruses in biological or therapeutic products require production processes that - ideally - completely eliminate the risks of virus contamination. Since the existence of very small amounts of viruses with a size of tens of nanometers causes severe damage to the entire bio-process, the filtration of viruses has to be pretty much perfect. Micro- and ultrafiltration have been successfully used in numerous processes as a robust step for virus reduction but they are not 100% effective. Currently used ultrafiltration membranes still allow smaller-sized virus particles to permeate into a small number of abnormally large-sized pores in the membrane. This broad size distribution of pores in ultrafiltration membranes and the low density of pores in track-etched membranes limit the practical use of virus filtration.