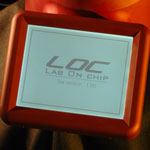 The term biosensing relates to systems that include electronic, photonic, biologic, chemical and mechanical means for producing signals that can be used for the identification, monitoring or control of biological phenomena. The resulting biosensors are devices that employ biological components such as proteins to provide selectivity and/or amplification for the detection of biochemical materials for use in medical diagnostics, environmental analysis or chemical and biological warfare agent detection. Surface plasmon resonance (SPR) has become the technology of choice for label-free detection of proteins and other biomolecules. SPR is based on the excitation of a surface plasmon at the interface between a dielectric and a thin layer of metal, typically gold. Once the sample is covered with the nanostructured gold layer (or another suitable metal), the surface absorbs light at certain wavelength. The absorption maximum is influenced by the refractive index of the fluid at the gold surface. This effect is called localized surface plasmon resonance (LSPR) and it is used for detection of presence of biomolecules, such as specific proteins.