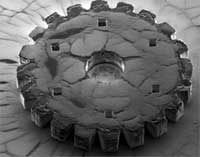 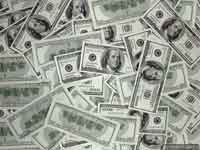 There seems to be an arms race going on among nanotechnology investment and consulting firms as to who can come up with the highest figure for the size of the "nanotechnology market". The current record stands at $2.95 trillion by 2015. The granddaddy of the trillion-dollar forecasts of course is the National Science Foundation's (NSF) "$1 trillion by 2015", which inevitably gets quoted in many articles, business plans and funding applications. The "nanotechnology market" as a unified market was first quantified by the NSF in its massive 280-pages report from March 2001. The problem with these forecasts is that they are based on a highly inflationary data collection and compilation methodology. The result is that the headline figures - $1 trillion!, $2 trillion!, $3 trillion! - are more reminiscent of supermarket tabloids than serious market research. Some would call it pure hype. This type of market size forecast leads to misguided expectations because few people read the entire report and in the end only the misleading trillion-dollar headline figure gets quoted out of context, even by people who should now better, and finally achieves a life by itself. 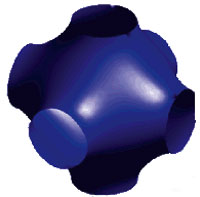 Self assembled structures from colloidal particles have many applications in biology, as chemical sensors and as photonic crystals. The control of shape and valency of the colloidal particle is very important since it will determine the 3D lattices of the assembled structure. There have been several prior effort to fabricating particles with complex shapes. Most particles with anisotropic shape are from the simple assembly of spheres or the modification of spherical particles. Interference lithography is one of the few techniques which can provide direct and systematic control over symmetry and volume fraction of the 3D structure. It involves the simple creation of interference patterns in a photoresist systems and subsequent pinch off of the parent structure through a drying process. Researchers at MIT have now presented a new facile and high-yield route for the fabrication of highly nonspherical complex multivalent nanoparticles. This technique exploits the ability of holographic interference lithography to control network topology. These research results could lay the groundwork for establishing and demonstrating control over particle shape in colloidal nanoparticles.

Nano-this and nano-that. These days it seems you need the prefix "nano" for products or applications if you want to be either very trendy or incredibly scary. This "nanotrend" has assumed "mega" proportions: Patent offices around the world are swamped with nanotechnology-related applications; investment advisors compile nanotechnology stock indices and predict a coming boom in nanotechnology stocks with misleading estimates floating around of a trillion-dollar industry within 10 years; pundits promise a new world with radically different medical procedures, manufacturing technologies and solutions to environmental problems; nano conferences and trade shows are thriving all over the world; scientific journals are awash in articles dealing with nanoscience discoveries and nano- technology breakthroughs. Nanotechnology has been plagued by a lot of hype, but cynicism and criticism have not been far behind. Science fiction writers exploit fears of nanorobots turning into killers; the media can run amok when news about potential health problems with nanoproducts surface (as happened last year with a product recall for a bathroom cleaner in Germany). Some see doomsday scenarios of molecular self-assembly turning the world into "grey goo." The emerging polarization of opinions on nanotechnology is reminiscent of controversies about genetically modified plants or nuclear energy. Vague promises of a better life are met by equally vague, generalized fears about a worse future. These debates have some aspects in common: the subject is complex and not easy to explain; there is no consensus on risks and benefits; scientists and corporations seem able to proceed unchecked, and it is unclear who is in control.

Why defects can be a useful thing for nanotechnology engineers 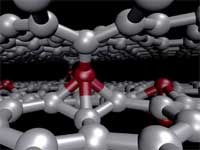 Research into the subject of radiation damage in graphite began in the early 1940s as a part of the development of nuclear weapons and nuclear power. Some designs of nuclear power reactors, such as the Chernobyl reactors, use graphite as moderator (the material which slows down the neutrons released from fission so that they cause more fission). The damage to the graphite moderators caused by radiation has been one of the major concerns of the nuclear power industry and radiation defects, i.e. structural irregularities, in graphite produced upon irradiation, their structure, properties and formation mechanisms, have been subject of intense research. Several years ago, defects in carbon materials became a hot topic again but now in the context of carbon layered nanostructures, such as multiwalled and bundled carbon nanotubes, which closely resemble graphite in their structure. The formation of irradiation-induced defects in graphite like layered carbon nanostructures, multiwalled and bundled carbon nanotubes, nanoonions, etc. changes their mechanical and electronic properties and may even trigger dramatic structural changes. While the terms "radiation damage" and "defect" are perceived negatively by people, the nanoengineering research community is trying to make use of defect structures for the deliberate modification of carbon nanomaterials, which can eventually be used in the manufacturing of nanoelectromechanical systems (NEMS). This process is sometimes called "defect-assisted engineering."