DNA nanotechnology in computers knocks down another roadblock

DNA origami, tiny shapes and patterns self-assembled from DNA, have been heralded as a potential breakthrough for the creation of nanoscale circuits and devices. One roadblock to their use has been that they are made in solution, and they stick randomly to surfaces - like a deck of playing cards thrown onto a floor. Random arrangements of DNA origami are not very useful; if they carry electronic circuits for example, they are difficult to find and 'wire-up' into larger circuits. A collaboration between Caltech and IBM research Almaden has found a way to position and orient DNA origami on surfaces by creating sticky patches in the shape of origami - as a demonstration they positioned and aligned triangular DNA origami on triangular sticky patches. This success knocks down one of the major roadblocks for the use of DNA origami in computer nanotechnology. 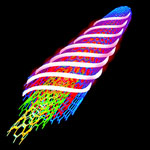 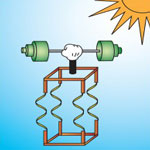 Studies have already shown the complexity of architecture that is achievable using DNA as building blocks. For instance, nanofabrication via molecular self-assembly has already resulted in simple DNA polyhedra with connectivities of a cube, octahedron, and a tetrahedron. Platonic solids - any one of five solids whose faces are congruent regular polygons and whose polyhedral angles are all congruent - are the most efficient at enclosing large volumes. The more complex the polyhedron, the greater its ability to encapsulate cargo, because the capsule size can be maximized while keeping the pore-size of the capsule minimal. The most complex platonic solid is the icosahedron and therefore this would be most suitable for achieving cargo encapsulation. The DNA shell of such a capsule could protect vulnerable drugs from degradation by proteins until they reach their target site. It could also prevent dangerous drugs from leaking out until the capsule reaches its intended target. The DNA shell could also allow attachment to a protein that could ferry the drug-loaded capsule to a target. 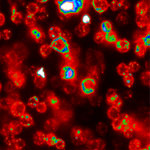 DNA nanomachines - synthetic DNA assemblies that switch between defined molecular shapes upon stimulation by external triggers - can be controlled by a variety of methods; these include pH changes and the addition of other molecular components, such as small molecule effectors, proteins and DNA strands. A team of Indian researchers has now taken structural DNA nanotechnology, where so far only in vitro applications have been demonstrated, across a new boundary and into living systems. They describe the successful operation of an artificially designed DNA nanomachine inside living cells, and show that these nanomachines work as efficiently inside cells as in vitro. The device is externally triggered by protons and functions as a pH sensor based on fluorescence resonance energy transfer (FRET) inside living cells.