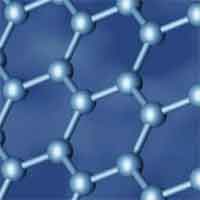 As a critical component of optoelectronic devices, transparent conductive coatings pervade modern technology. The most widely used standard coating is indium tin oxide (ITO), used in nearly all flat panel displays and microdisplays. Causing problems for manufacturers, though, Indium is expensive and scarce and demand is increasing. From the depressed levels of $60/kg in 2002, indium prices rose to over $1,000/kg during the summer of this year. Recently, prices have fallen back to between $400-$500/kg. But, geologists say the cost of indium may not matter soon, because the earth's supply of this element could be gone within just a few years. In addition to the limited availability of Indium there are other reasons that make ITO and other metal oxides such as FTO (fluorine tin oxide) increasingly problematic for electronics manufacturers: the instability of these metal oxides in the presence of acid or base; their susceptibility to ion diffusion into polymer layers; their limited transparency in the near-infrared region; and lastly, the current leakage of FTO devices caused by FTO structure defects. This has made the search for novel transparent electrode materials with good stability, high transparency and excellent conductivity a crucial goal for optoelectronic researchers. Recent work by researchers in Germany exploits ultra-thin transparent conductive graphene films as window electrodes in solar cells. 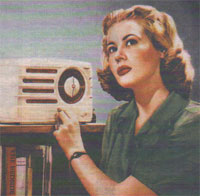 We have written plenty of Spotlights so far on carbon nanotubes and nanoelectronics. For instance, carbon nanotube (CNT) transistors have the potential to outperform state-of-the-art silicon devices. Researchers around the world have been working for years on advances at the device level, things like switches and wires and optimizing individual CNT transistors. More recently, scientists have begun to integrate nanotechnology-based materials and devices into larger systems - a crucial step in getting nanotechnology from the lab to the fab. Last year, for instance IBM reported to have built the first complete electronic integrated circuit around a single carbon nanotube (An integrated logic circuit assembled on a single carbon nanotube). Researchers in California have now reported another step towards showing nanoelectronics in systems: They have developed the world's first working radio system that receives radio waves wirelessly and converts them to sound signals through a nano-sized detector made of CNTs. Although this is only the demonstration of a single critical component (the CNT as demodulator) of an entire radio system, it is entirely possible that at some point in the future all components of a working radio could be nanoscale, thus allowing a truly nanoscale wireless communications system (apart from the magnitude of the technological achievement, this is probably great news for surveillance freaks, not so much for privacy advocates). 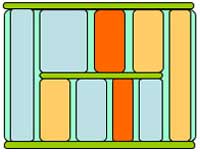 Nanoelectronics deals with functional electron devices, such as transistors, in the nanoscale range size. As the name implies, nanoelectronics runs on electricity, i.e. the transport of electrons. Another approach to creating faster,smaller and more energy-efficient electronics is to move the field of optical information processing towards the nanoscale. Optical nanoelectronics will work with light instead of electron transport. Here the usual circuit elements such as inductors, capacitors and resistors could be created in order to operate using infrared or visible light. Using nanotechnology, researchers are able to create structures that could operate on the same or smaller scale as the wavelength of light (the wavelength of visible light is roughly between 400 and 700 nanometers). Going beyond 'conventional' nanoelectronics, researchers have now proposed a form of optical circuitry in which a network of subwavelength nanoscale metamaterial structures and nanoparticles may provide a mechanism for tailoring, patterning, and manipulating optical electric fields in a subwavelength domain, leading to the possibility of optical information processing at the nanometer scale. 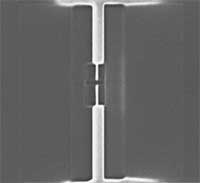 Yesterday we wrote about air bridges in nanotechnology fabrication. Today we show a practical example. Traditionally, electronic devices have been fabricated by top-down fabrication methods. Conducting polymers, for instance, have been synthesized as micro- and nanoscale fibers, tubes and wires for more than 10 years now. More recently, nanowires have been integrated into electronic circuits, making possible the development of devices such as polymer nanowire chemical sensors with superior performance. What most of these fabrication techniques have in common is that they are template-based (e.g. lithography or DNA templates) or depend on specialized fiber forming techniques such as electrospinning. However, as electronic components become smaller and smaller it is increasingly more difficult to use existing methods of fabrication. New methods must be developed. A group of researchers in Australia have demonstrated a technique for growing ordered polymer nanowires within a pre-patterned electronic circuit such that electrical contacts to the nanowires are made in situ during the growth procedure, avoiding the time-consuming and challenging task of manipulating nanowires into position and making electrical contacts post-synthesis. 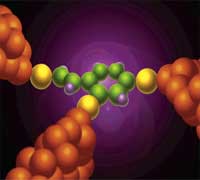 Transistors are the fundamental building blocks of our everyday modern electronics; they are the tiny switches that process the ones and zeroes that make up our digital world. Transistors control the flow of electricity by switching current on or off and by amplifying electrical signals in the circuitry that governs the operation of our computers, cellular phones, iPods and any other electronic device you can think of. The first transistor used in commercial applications was in the Regency TR-1 transistor radio, which went on sale in 1954 for $49.95, that's over $375 in today's dollars (for everyone in the iPod generation - watch this fascinating 1955 video clip artifact how the first transistor radio was hand built). While the first transistors were over 1 centimeter in diameter, the smallest transistors today are just 30 nanometers thick - three million times smaller. This feat would be equivalent to shrinking the 509-meter tall Taipei 101 Tower, currently the tallest building in the world, to the size of a 1.6 millimeter tall grain of rice. The 32nm microprocessor Intel plans to introduce in 2009 will pack a whopping 1.9 billion transistors. However, current microprocessor technology is quickly approaching a physical barrier. Switching the current by raising and lowering the electron energy barrier generates heat, which becomes a huge problem as device densities approach the atomic limit. An intriguing - and technologically daunting - alternative would be to exploit the wave nature of the electron, rather than its particle properties, to control current flow on the nanoscale. Such a device, called the Quantum Interference Effect Transistor (QuIET), has been proposed by researchers in Arizona. This device could be as small as a single benzene molecule, and would produce much less heat than a conventional field effect transistor. 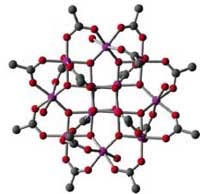 Molecules with memories - developing the future of the electronics industry 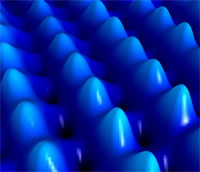 Apart from buying a new computer every year it seems you need to upgrade your old machine on a regular basis to keep pace with ever bigger software packages and image files. Apart from the hassle of having to perform major surgery on your computer, these upgrades cost money. But, what if these upgrades were no longer necessary? What if your desktop computer came standard with the ability to store more data than you could ever possibly need and was able to function at unbelievable speeds? This would be too good to be true, right? Besides, who has the space for such a megacomputer. Well, imagine that this megacomputer could be packaged as a smaller device than current laptops, and cost only a fraction of todayâ??s prices? This sounds like hard core science fiction, but like so many radical science fiction ideas - the real thing might happen sooner than you think. As chip designers are nearing the physical limits of Moore's law (some say that the exponential increase in the cost of semiconductor production will most likely stop the current miniaturization trend before its physical limits are reached), scientists around the globe are working hard on developing the field of molecular electronics. An interdisciplinary science that includes physics, chemistry, nanotechnology, materials science and even biology, molecular electronics involves using molecular building blocks in the manufacture of electronic components. Driven by a growing interest in alternative concepts, like the integration of molecules as carriers of an electronic function, the electronics industry is poised to take the crucial step of integrating molecular devices into electronic circuits.

Can nanotechnology save LCD TVs? 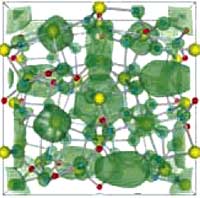 Many of us don't like to admit it, but televisions are an important part of our lives. Technology has improved the quality and convenience of TVs and has given us a whole new set of choices - high definition, plasma, and liquid crystal displays. With an estimated 66 million sets to be sold this year, flat-screen LCD televisions are the most popular choice. Much of the reason behind the popularity of these high-tech wonders is the decrease in price that happens with most cool technology - a few years after they have been on the market. But, for the popular LCD TV, a shortage of a key compound used to produce LCDs may force manufacturers to raise prices. Electronics suppliers are facing a shortage of the rare metal indium, a co-product of zinc mining. Indium is a rare, malleable and easily fused metal, similar to aluminum, which is used to make indium tin oxide (ITO), the standard transparent electrode used in nearly all flat panel displays and microdisplays. Indium is expensive and scarce and demand is increasing. According to Displaybank, the demand for indium was 861 tons in 2006 and may reach nearly 2000 tons by 2011. Five years ago, indium was about $100/ kg; now it costs $800/kg. Displaybank expects the total sales of indium in 2007 to be $533 million. But, geologists say the cost of indium may not matter soon, because the earth's supply of it could be gone in four years. This could put a serious damper on that 52" LCD screen you've been dreaming about. Fortunately, with the help of nanotechnology, a team of scientists in Japan have developed a new material that may replace the need for indium in LCD production.