Strange new materials experimentally identified just a few years ago are now driving research in condensed-matter physics around the world. Tthese "strong 3-D topological insulators" - TIs for short - are seemingly mundane semiconductors with startling properties. Topological insulators offer unique opportunities to control electric currents and magnetism, and are promising materials for future spintronic applications or could provide access to novel, fascinating physical phenomena. While so far, only synthetic TIs had been experimentally identified, researchers in Germany report the discovery of a natural occurring topological insulator: the mineral Kawazulite. 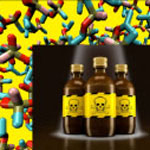