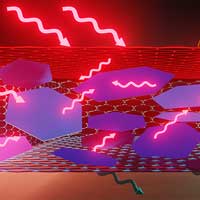 Deep brain stimulation (DBS) is an effective treatment for many neurological disorders, but despite its widespread utilization the underlying mechanisms and downstream effects of DBS remain poorly understood. One major issue to understand the therapeutic mechanism of DBS is to map the wide variety of brain responses at both the local and global levels. Researchers have developed a highly MRI-compatible graphene fiber electrode that enables full activation pattern mapping by functional magnetic resonance imaging under DBS without the occurence of artifacts resulting from magnetic field interference.