Researchers have developed a hybrid sperm micromotor, which can carry a payload and efficiently and controllably swim against flowing blood. Sperm-based micromotors hold several advantages, in particular their powerful propulsion generated by the beating of the sperm flagella. Sperm are also able to swim for several days with a drag force up to 100 pN. The most important feature of sperm micromotors to operate in the bloodstream is their ability to swim against flow as well as close to boundaries, where the blood velocity is lower than the average velocity, due to shear stress.

Researchers have demonstrated the creation of a living micromotor with multifunctional capability. The distinctive feature of this device is that it doesn't require synthetic materials and therefore avoid the problems of energy consumption and waste production generated during material synthesis. Using microalgal Chlamydomonas reinhardtii cells as the sole material, the scientists made living and multifunctional micromotors controlled by optical force. This system might be particularly useful for indirect manipulation and controllable disruption of biological targets.

4D nanomedicine based on biodegradable and biocompatible nanoalloys: difficult as catching a comet!

Imagine catching a comet. Now imagine the comet is as small as a few billionths of meters and it is made of elements from the periodic table that do not like each other; whose fate is that of separate in space and dissolve in biological environments or just in air. Before this happens, the elements are trapped in what is called a non-equilibrium alloy nanoparticle. Since this nanoalloy changes over time, it is not enough to provide its composition and size at a given time, but one should know also how it will change in the near future, or how it changed in the near past.

Researchers have successfully produced durable antiviral surfaces that inactivate SARS-CoV-2 within 6 hours. In contrast, on various non-nanostructured surfaces or smooth surfaces, the SARS-COV-2 virus remained viable for up to 48 hours. These results provide evidence that surfaces that are structured with specific nanoscale surface features are effective in preventing SARS-CoV-2 and the subsequent environmental spread. Such nanostructured surfaces can be used in hospital environments and can be extended to other industrial sectors and public infrastructure such as transportation, where fomites or contaminated surfaces are carriers for viral infections.

Biofilm formation is an important adaptation and survival strategy commonly employed by bacteria but, unfortunately, a major cause for infections in humans. Researchers have now demonstrated the safe removal of in vivo bacterial biofilms through artificial nanomotors driven by near-infrared laser light. This is the first demonstration of a self-propelled antibiofilm platform capable of conducting photothermal and antibiotic therapy in the deep layers of biofilm, achieving high therapeutic efficiency in vivo without damaging healthy tissues.

The physicochemical properties of nanoparticles alone cannot predict the fate of nanoparticles in biological systems. Current evidence suggests that the formation of a corona on the nanoparticle surface is the most important parameter that controls nanoparticle toxicity. Scientists now showed that protein corona modulates internalisation and cytotoxicity of nanodiamonds in non-phagocytic and phagocytic cells. Specifically, they found that corona made of bovine serum albumin (BSA), which represents the most abundant protein in blood plasma, reduced nanodiamond agglomeration. 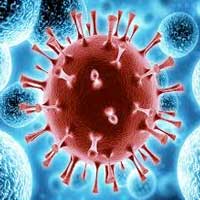 The only options to control and deal with the spread of the Severe Acute Respiratory Syndrome Virus 2 (SARS-CoV-2) are fast, cheap, reliable, and portable means of diagnosing COVID-19 infection (the name of disease caused by SARS-CoV-2); therapeutics to treat the infected; and vaccines to rapidly build up immunization of large parts of the global population. The current crisis demands an urgent analysis of all the available nanotechnology tools. While nanomedicine strategies are in use for the design of the vaccine carriers, there are not enough other nanotechnology approaches being explored to tackle the current outbreak. 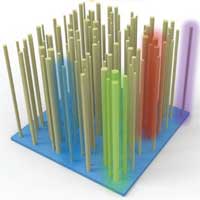 Vertical semiconductor nanowire arrays are a promising material for retinal prostheses, which could help restore the eyesight of people suffering from severe retinal diseases. These nanowires could also be used to fabricate bio-inspired photoreceptors and lightweight, highly efficient photovoltaics. In new work, scientists present theoretical and experimental studies on the microscopic optical behavior of highly dense and randomly distributed nanowire arrays embedded in a transparent polymer.